Run For The Roses 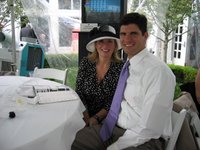 Our first Kentucky Derby was awesome! We went to THE hat party in Louisville the night before the Derby. My friend's brother and his partner throw this thing -- 250 guests -- media coverage -- and even had liquor sponsors this year.

My friend, Amy, scored us awesome Derby tickets -- we were up with the celebrities and having lunch at the Derby museum.

Best part of the whole day, though? The winning bet on Giacomo! (Sure, it was only a $2 bet...but it paid off all of our other gambling debts).

Only downside? The mock mint julep -- damn pregnancy.
Posted by Brutalism at 7:08 PM No comments:

Can I Get An Amen?

A cousin I have not talked to in many, many years sent me an e-mail this week asking me if I had been saved and if I had accepted Christ as my personal savior.

I forwarded the "have you been saved?" e-mail to my friend Amy. She wrote back, "Wow. God spam." I don't know about you -- but I think that may be the best name for a band I have ever heard.
Posted by Brutalism at 2:42 PM No comments:

For my birthday this year, Canetto and I went to the Inn at Little Washington with our best couple friends, Pete and Amy.

As with everything we do with Pete and Amy, the evening proved to be pant-wettingly funny.

God only knows how loud we were, but our waiter seemed to enjoy serving us and we had a great time with him. All I know is that I was laughing so hard, I SNORTED. TWICE. AT THE INN AT LITTLE WASHINGTON.

I'm fairly proud of that.
Posted by Brutalism at 9:17 PM No comments:

When I went to school at JMU, the only place to hang out was JM's, right across the street from campus. That alone dates me, as does my mention of the fact that when I was there, the "townies" still kind of had it in for us and still hung out at JM's, which stopped after I was in school there for a couple of years and they wised up and decided that being around a bunch of drunk college kids, some of whom are inevitably throwing up or crying over boyfriends ain't such a party.

I remember seeing some graffiti (obviously written by a townie) in the women's bathroom that read, "Collage girls are whores."

I also remember that when I went to school there, I made out with a whole lotta guys. Hey! I was young and in college -- that's what you're SUPPOSED to do. I was joking about this with a co-worker one day, saying that I had made out with half of JMU. As if on cue, an old friend from college called just then. I made mention to my co-worker that it was an old friend from school and the co-worker asked, "one of the lucky 50%?". Turns out, he was.