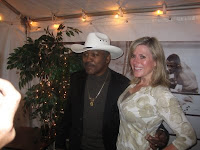 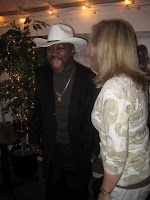 My friend, Hillary, got me on the list of her PR firm's anniversary party a few years ago, which means I've received invitations every year since. (I wrote about last year's party here.) She no longer works there, but that has not stopped me (or her) from attending these things. PR people can throw a party.

This year, my friend, Terri (who has also been to a few of these), and I got to the party a little late. We walked in and sat down with our drinks when all of the sudden Smokin' Joe Frazier himself came and sat right next to me. My purse was in his way, so he grabbed it and pretended he was going to steal it, so I said to him, "What? You think you're some kind of tough guy? Let's take this outside." "I wouldn't do that. It doesn't match your outfit." That made him laugh -- he was a really cool and nice guy -- he kidded around with us and let us take pictures with him before the "official" pictures started. (When he put his arm around Terri to take a photo, he asked her if her husband was black. She said "No, but hers is." and pointed to me.) I have no idea what any of that conversation has to do with anything, but Terri, Joe and I all seemed to find it very amusing at the time. I'm sure the beer had very little to do with it.

We network a lot at this thing and do a lot of mingling. Which is pretty hilarious, as we really have no right to be there. Whatevs...we now have friends we've made that we see every year...so I'm actually beginning to consider us trespassing hooligans "inner circle."

Anyway...we're already wondering who the celeb will be for the 13th anniversary next year -- any ideas?
Posted by Brutalism at 2:13 PM

Honestly, you should charge them for attending. On the west coast (so I saw on Lifetime) there are professional party attendees who can make sure a party is fun fun fun!

And next year's celeb: none other than Rod Blagojevich. He's on his way to being a professional party boy.

See? I'm thinking someone from Apollo 13, though I guess the astronaut thing has already been done. Thirteen is a baker's dozen...so someone who bakes? Someone named Baker? Perhaps you're onto something with Blagojevich -- 13 is an unlucky number and he certainly fits that profile...

How great would it be to be paid to mingle? I think it is a great idea, though beer really helps get a party going for a lot less money...

I have all of one photo on my camera from the party - its of you and Joe. Go figure. And, you outlasted me at the party. Again, go figure.

Hey, my son went to school with Smokin' Joe's youngest son, who, surprisingly, is only in High School. He was an eighth grader when my son was a kindergartner, and the little Frazier was one HUGE kid. I never saw Joe himself, but I saw his big SUV parked illegally a few times. I once saw a cop approach the SUV preparing to write a ticket when the crossing guard told him who the vehicle belonged to. He snapped shut his ticket book and wandered away.

Joe Frazier rules in our neighborhood.

Oh that's right -- I almost forgot that he lives in Philly. And has 11(not a typo) kids. Too funny that your kids went to school together. Small world.

Bermanator - I'm sure your photog friend snapped some good ones of you. I think Terri got some, too. Thanks for starting all of this, lo so many years ago...

Your boobs look good in the pics.