I Wouldn't Want To Paint It

It's a small world. (I just coined that phrase. Catchy, huh? I see
t-shirts...merchandising...getting Disney involved in some capacity...)

Supposedly over Labor Day weekend, I was sent a text message by Jeff Cockey. (He says he sent one, but I did not receive one. Either he did not send it or -- a more likely scenario -- he sent it and due to my complete lack of texting ability, I deleted it by mistake.) (Aside: Once, when I was due to pick Cockey up from Dulles airport, he texted to let me know he arrived so I could come get him. I wanted to let him know that I was on my way, but had no idea how to text back, so I pressed "reply" and then something like "QYR98621."  He wasn't sure if I had been abducted, was drunk, or if I was just completely technologically retarded.) He (correctly) went with option "C". (Although "Both B and C above" would also have been an acceptable answer.)

The Labor Day text was to let me know that he was at a party in Hermosa Beach, California, with none other than one of my ex-boyfriends (who lives on the East Coast and was out there visiting). Somewhere in between guzzling bad beer and ogling girls on the beach, they put it together that they both knew me.

Remember your favorite storybooks from childhood? When you'd nestle into your parent's arm and listen to tales of familiar characters that you'd begin to think of as your friends? And how that opened up your world? Like the story about Babar, the sweet little elephant, gigolo? 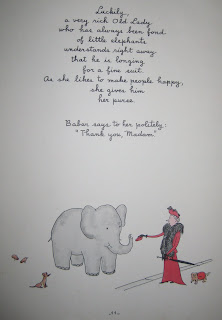 Mon dieux!
Brutalism
Posted by Brutalism at 9:24 AM 16 comments:

Your Gubmint At Work

I am developing a style guide for the documents we create at my company. In doing this, I and another Project Manager who is working on this with me are following some of the Government Printing Office (GPO) guidelines to incorporate into our manual.

Today, we discovered that the GPO style guide helpfully indicates that the word "werewolf" is one word. Which, as always, raises some questions in my mind:

1) What kind of grammar idiot has ever written that as two words?
2) How come I've never been staffed on a werewolf contract?
3) How many of my tax dollars went into researching whether or not that was hyphenated?
4) Really?

Howling at the lunacy,
Brutalism
Posted by Brutalism at 7:05 PM 12 comments:

I'm Betting That A Phillip Hart, By Any Other Name, Would Not Smell As Sweet

Yesterday at work, I received an e-mail from a vendor. The naming convention for his corporate e-mail account was (like many) the first letter of his first name and then his last name. So, the e-mail I got from Scott Loth was Sloth@company.com.

Things like this amuse me probably more than they should. Although when I mentioned it in my weekly team meeting, my boss shared an even better one -- his wife had once worked with a Phillip Hart, whose company also used that type of naming convention.
Another friend said she once worked with a Richard Ebel, who was anything but.

How about you guys? Seen any e-mail addresses that were particularly (and unintentionally) funny?
Posted by Brutalism at 1:57 PM 26 comments: