A charming little burg near us is going through quite a bit of redevelopment lately. Part of this development involves tearing down Vienna's only two-star hotel that in recent years has been - shall we say - narcotics adjacent.

(I posted pics of the sign on Instagram with the comment about it being a two-star hotel and a neighbor commented, "Huh. Two stars seems generous." This may give you an idea of why this particular plot is being redeveloped.)

We've been watching the demolition progress over the past week and my husband noted after walking by a couple of days ago that the only thing left standing amidst a pile of rubble was the original roadside sign. Which is when I became determined to own the sign sporting that glorious 70s font. And if this required multiple phone calls and a couple of trips to the demolition site in order to infuse my dull life with some much-needed shenanigans, preserve some Vienna history, then so be it!
Unsure of the process of acquiring a hotel sign, I began my sleuthing by emailing a friend who works for the Town where this hotel is located. She did not know, but learned that I should contact the building owner (based in NJ) directly. I called and the NJ office referred me to their Annapolis office and a woman named Lisa, who excitedly approved my request right away - and suggested that because all debris was being removed that day, my best bet was going directly to the demolition site to tell the demolition manager we had permission to remove it and taking the sign.
This led to a frantic call to my husband, letting him know he needed to come and get me so we could go get the sign NOW! (Adding to the fun is that I recently broke the wrist on my dominant hand and have not yet been cleared to drive and/or handle freeing/moving large hotel signs at demolition sites.) My doctor is uptight.
When we got to the site, Mr. Brutalism went to find the demo manager and I used the time to text my friend a recap of the morning's antics, which is when I noticed some other items available on the site, which I graciously offered her because I am a good friend:
then followed up with this sentiment... 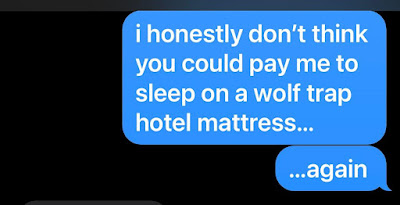 The demo manager would not give us permission to take the sign until his boss (who was not on site) approved it, which led to another phone call - this one to the office of the demo company. We were not able to reach the boss, so we left a message and returned home, dejected.

Early the next day, I called the demo company again, hoping the sign had not been razed - and again - my call went straight to voice mail. So, I called Lisa again and she offered to call the demo guy directly - while again giving us permission to just take it, as their company owns the building. I thanked her for graciously helping in our quest for the sign and again called my husband to come get me while I assembled a variety of tools we would possibly need for this operation.

When we got to the site, I again remained in the car on a work call while Mr. Brutalism went to assess the situation - and moments later, he returned to the car with the following:

Of course, we are the only family in the entire DMV metro area that does not own an SUV, so there was a moment of panic when we realized these would not fit in the car. But because he's a planner and brought twine, Mr. Brutalism had these strapped to the roof of the car in no time.

I texted Lisa the photo of Tim with the sign, thanking her for all of her help  - and she wrote back, "Yay!!! So happy you got it!" because she is cool and a nonsense enabler.

After all of that, I never really considered what we would do with these if we were successful in our acquisition. Thoughts?

Posted by Brutalism at 3:26 PM No comments: