A Beacon of Hope

I started a new job recently that requires a considerable amount of time and focus, which means, of course, it became a priority to write a letter to the editor of The Beacon in Virginia Beach about nonsense.

The Beacon is a very thin tabloid insert in my hometown's newspaper. There is nothing prestigious or worthwhile about being named here, which is why I want to be...badly. (For further insight, see: done, everything I’ve ever.)

It has been three days since I emailed the following. Response thus far? Crickets. Score? Brutalism - 1; Fun - 0

While out to dinner recently with a group that included my mother (a long time Virginia Beach resident) and a friend I met while attending Bayside High School in Virginia Beach, our conversation turned to The Beacon (as it will).

We discussed how being mentioned in The Beacon was a rite of passage of sorts, and just about everyone we knew had been featured in its pages at some point in their lives. (For example, my mother has been named in The Beacon at least three times she can remember, and my friend at least twice.)

I live in Northern Virginia, which has been my home since graduating from college. It’s a lovely area, and since moving here, I’ve had my share of successes recognized by Washington-area publications. My annual Oktoberfest party was written up in The Washington Post; my finalist Peeps dioramas were featured in The Washington City Paper; and the Dilettante Club I founded was interviewed by Washingtonian magazine. While this is nice and obviously career-boosting, I’ve never experienced the joy and validation of being recognized by my hometown paper.

When I shared this fact at the above-mentioned dinner, everyone at our table began teasing me mercilessly. To defend myself, I noted to the high school friend’s husband, “Hey! I was even in the Guinness Book of World Records." To which he inquired, “For what? Most consecutive years of not being in The Beacon?”

I lived in Virginia Beach from the impressionable, formative ages of seven to 23, during which time I watched my mother, sister, and all my friends mentioned by name and sometimes, with accompanying photo, in your publication. Were my foreign language day at Pembroke Mall, participation in the Latin convention, and 3-8 record on the Bayside field hockey team all for naught? My perfect attendance in elementary school, 2nd place win in both the third grade spelling bee and community pumpkin-carving contest achievements not worthy of a mention? I even placed second in jump rope during Field Day one year. Was none of this good enough to warrant a few words in print?

While this (I’m sure, inadvertent) snub has likely motivated me to work harder through the years, it has also left a void in an otherwise fulfilling life. However, I believe it is not too late to right this wrong. I have a beacon (heh) of hope that one day I will be featured in your esteemed periodical. What do you say, Mr. Beacon Editor? Can you make a hometown girl’s dream come true?

UPDATE: While at the grocery store last night, I learned of this Northern Virginia periodical, so perhaps there is still hope of my Beacon dreams coming true one day, albeit in a different Beacon. 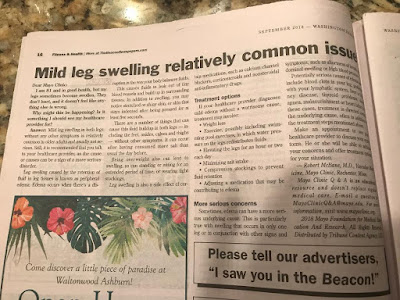 UPDATE #2: My friend, Bonnie, crafted the following to help me feel better. She perfectly married my need to be in The Beacon with my utter distaste for the word "unguent" and capped it off nicely with an actual photo from my youth that showcases my Mother's lack of bang-cutting skills. I'm verklempt. 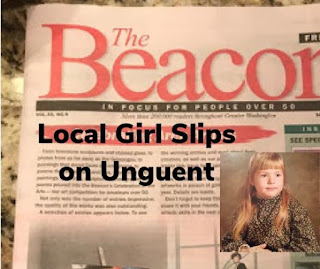 UPDATE #3: An email I received from the Beacon editor this weekend:


Ms. Canedo,
What a wonderful email, the best I've received in years! It's so true, being mentioned in the Beacon is a rite of passage. And it's so sad that your family and friends have subjected you to teasing due my publication's snub of your many achievements.
Let me try to right this wrong. I'd like to write my upcoming Beacon column about you. OK?
To do so, I need more information. First, I already tried to do a quick search of your name, including a simple search of "Canedo," and found nothing in our digital archives. But they can't be trusted. We've lost a lot of archive material as we've shifted software over the years.
I must confirm that you indeed were snubbed, so let's clarify - would you be named "Kathleen Canedo" if you were ever in the Beacon? Also, I'd like to search for the stories your mom and your friend were included in. Would you please provide their names and a general timeframe of when their "mentions" appeared (even guessing the decade would help)? And, when did you graduate from Bayside? What college(s) did you go to and when did you graduate from them?
By the way, I found the Washington Post story about your party. And by Googling your name I found this link: https://patch.com/virginia/oakton/ev--meet-oakton-humorist-kathleen-canedo
How wold you describe your current career, including any side jobs? Do you still have a humor column?
My Beacon column is short (example of a recent one:https://pilotonline.com/news/local/columnist/from-beacon-editor/article_02e82d1e-c5a6-11e8-b7e9-f72cdb8bc7fb.html) , so much of this won't be included in what I intend to write. But the "rite of passage" theme is important, so I hope you'll cooperate with this endeavor.
I'll be writing this up today and tomorrow. Feel free to call me at the number below, if you'd like.

FOURTH AND FINAL UPDATE: A dream, realized. Getting Your Name in the Beacon is a Rite of Passage for Virginia Beach Natives.
Now what?
Brutalism
Posted by Brutalism at 10:04 AM 4 comments: