Sometimes I forget where I live.

And not just after over-indulging at a party. Like the end-of-first-grade-pizza-lunch rager I attended recently at my daughter’s elementary school.

And also not because I have early-onset Alzheimer’s.

I mean it figuratively. But those times I do forget, something inevitably happens that reminds me some parts of the DC metro area  are rather more affluent than I can even comprehend.

This weekend was one of those times. While driving through the area on Saturday, my friend and I happened upon a roadside lemonade stand staffed by two girls who appeared to be about 8 years old. Feeling nostalgic and wanting to reward their entrepreneurial spirit, we pulled over and offered to treat my daughter, who was also in the car with us, to a cup.


And one of the little pint-sized highway robbers said matter-of-factly, “That will be 50 cents, please.”

FIFTY CENTS! For one six-ounce cup of lemonade! That she first crammed full of 19 ice cubes and then used only enough lemonade to fill the cup halfway, so noticeably trying to increase her profit margin that my friend asked, "Could you please pour a little more in there?" The tiny thief added one teensy splash, thus ensuring that 48.5 of those cents would effectively line her greedy little pockets.

And yet....YET....because I am an avid supporter of small and women-owned-business and wanted to encourage this little felon, I also decided that I would tip her. Then, she would learn the elation and freedom that we all did as kids when the lemonade stands we operated earned us enough to buy our own candy! The power! The independence! The CANDY!!! Helping her experience that feeling (sugar rush?) -- something that is only appreciated after you've worked hard to earn something -- was well worth the extra quarter to me.

When I handed her the additional 25 cent tip, she said to me, "Oh, my sister will be so happy" and then mumbled something else I could not discern. My friend had a funny look on her face and when we got back in the car, asked me, "Do you believe what she said?" When I told her I did not hear it, she explained, "Well, I'm not sure you want to know. She said that her sister would be so happy because she is going to Germany."

Is it wrong to hope that little shyster buys some Kinder surprise eggs with that money?
Brutalism
Posted by Brutalism at 1:39 PM 1 comment:

Going to the Chapel

Last week, I took the day off work to ride around Washington, DC, in a limousine while sipping champagne and hobnobbing with celebrities.

In the interest of total transparency, the hobnobbing consisted of seeing CNN anchor John King on the sidewalk in front of the Capitol while we stopped there to take photos. And since I'm not entirely sure what the definition of hobnobbing is, we'll assume the sidewalk sighting counts as such.
And truthfully, this was a very special occasion -- the wedding of two friends who have been committed to each other for 22 years and wed in DC because they are still not permitted to legally marry in Kentucky where they live. (I do know the definition of  "ridiculous.")

After sightseeing in the District from the limo, we went to the DC Courthouse for the ceremony, and I have to say...it was refreshing to finally be there for an occasion that did not require me to "lawyer up." (The same cannot be said for my friend, Amy, whose purse corkscrew contraband was confiscated by the Courthouse guards after it was identified in the metal detector.)

The ceremony itself was so touching and emotional and made more so when Amy's son (the grooms' nephew) proclaimed loudly, "those are happy tears!" when he saw nary a dry eye in the house. Kids rock.


Following the wedding, we did more sightseeing and also experienced some safety checks as our limo was pulled over by DC's finest twice so they could search the trunk and open the door to ensure we were not planning a terror attack. Both times this occurred, the officers opened the back door to see three young children in car seats sipping on their juice boxes. As friend, Pete, noted, "even the terrorists aren't that cruel."

The day ended with a beautiful reception at Amy's house in Arlington. And more celebrity hobnobbing:
It is also where I learned some new math. That being that no matter how many gay men attend a party as guests, their combined total body fat will not equal more than 2%. 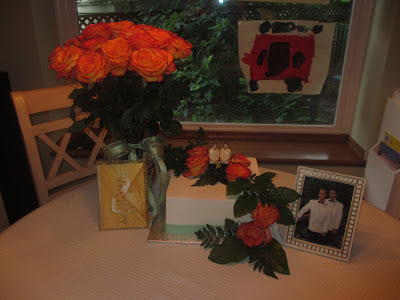 P.S. Thanks to DC Blogs for linking to this post today!
Posted by Brutalism at 12:10 AM 5 comments: