Yesterday, I received notification that the Peeps diorama Hillary and I submitted was chosen as a finalist in the Chicago Tribune Peeps diorama contest. (The Tribune person that notified us is named Darcel Rockett, which may be the coolest name I have ever heard -- and not just because she notified us  that we were finalists...)

And you, my savvy readers, will note that I mentioned we were participating in the Washington Post contest. Well, we learned long ago that the Post (our hometown paper) does not seem to recognize our talents. So this year, we diversified...and entered our diorama into a few contests across the country.

We are so unbelievably ridiculous smart.

Hillary and I are now faced with needing to deliver our diorama to the Chicago Tribune offices for judging/photographing. As it is our baby, we do not want to trust this to FedEx or UPS, but want to hand-deliver it. Which had us looking up plane fare in our excitement last night.

And you thought I was kidding about needing to get a life...
Posted by Brutalism at 10:12 AM 9 comments:

The weeks, they pass so quickly.

My Oakton Patch column is up -- this week, I make reference to private parts, the f-word, my mom and urine.

The column was fun while it lasted,
Brutalism

UPDATE: Great interview with Kady from A Lady Reveals Nothing at So...What Else? I loved her and her traveling lifestyle even before I got to the part where she listed me as one of  her favorite bloggers. Loved her more after. Check it out!
Posted by Brutalism at 4:39 PM 3 comments:

Keys To My Happiness

This week's Oakton Patch column is up and it is a milestone of sorts. It is the second column I've written for the Patch that references swinging.

But perhaps the greater milestone is that I have now been writing a weekly column for six months -- today, my 26th column was posted. I'm proud that I have been able to keep it up (TWSS) and am enjoying it a lot.

Now, if you'll excuse me, I've got some new neighbors to meet,
(*licks thumb and pinky on right hand and smooths down eyebrows*)
Brutalism
Posted by Brutalism at 3:00 PM 5 comments:

It Is An Honor Not To Be Nominated...

One of my friends just sent the following, noting that several people in her office had received this "award" today: 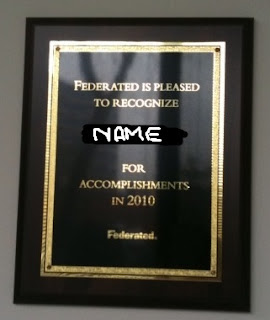 How proud they must be. "Accomplishments." Can you imagine learning that you were in line to receive a professional commendation and this is what it turned out to be? I'd trade in the fancy celebratory dinner I had planned for a six-pack of Pabst (hipster product placement alert).
It just screams "lack of enthusiasm" doesn't it? "Yeah, you had some accomplishments...but we're too tired to name them specifically. Keep up the perfectly competent and satisfactory work, though, tiger lap dog."
Can you think of anything more vague? No, really -- can you? What could be less motivating than this wording on a commendation plaque?
Let's see what you come up with, you perfectly competent commenters,
Brutalism
UPDATE: Rodney at Mental Poo linked to this post in his weekly wrap up.  No. You make me laugh, you sexy bitch, you.
Posted by Brutalism at 7:49 PM 6 comments:

Life Is Great. I Ought To Get One.

Someone found Brutalism last night by googling "Calvin peeing on mixed races." (Brutalism is the number two result that pops up.) I'm guessing it is because of this and this?

This blog is an education every day.

TMI On So Many Levels

This past weekend, my partner in crime and I spent an ungodly amount of hours constructing our Peeps diorama for this year's Washington Post contest.

In the wee hours of the morning on Saturday, I bolted upright in bed, knowing that I must do a Snoop Dogg figure -- and not knowing how I would be able to construct his realistic-looking braids. (As realism is paramount when using Peeps as your art medium.)

Then, I remembered the doll heads.

You see, last year, when we did the Blue Man Group as our Peeps diorama, I bought three dolls from the dollar store to use as the Blue Men. We used the bodies but had no use for their heads (insert analogy for Charlie Sheen's "girlfriends" here). However, I've been in the diorama game long enough now to understand that I may need them for a diorama in the future, so I kept them. And in the past year, Canetto, Avery and I have enjoyed playing the doll head game. We take turns leaving the three creepy doll heads on each other's pillows, in each other's underwear drawers, in cereal boxes...so that the other members of our family will come upon them unexpectedly and have a heart attack. Oh -- the hi jinks that ensue!

As it turns out, I found them in the second underwear drawer in which I looked and promptly scalped one and made tiny little Snoop Dogg braids from her hair.

And then I spent the rest of the day questioning my existence.
Posted by Brutalism at 2:56 PM 14 comments:

This week's Patch column is up. It's about how my husband and I have stayed married for almost twelve years even though we are very different people. (You read it here first -- my husband and I are not conjoined twins.)

How have we achieved this? One word: Beer.

UPDATE: My Oakton Patch editor (Hi, Nicole!) just e-mailed me to let me know that someone found my column about traveling to Indonesia by doing a search for "diaper fetish." I feel legitimized as a writer.

UPDATE 2: My friend, Jeff, told me last night that he is currently filming a movie with Leo DiCaprio and is in a scene where he speaks to him. I, of course, asked that he please lick Leo for me. He wrote back, "Well, the film is about J. Edgar Hoover, so that action is probably written into the script already."
Posted by Brutalism at 3:36 PM 4 comments:

Please visit my other blog, The Dilettante Club, to hear about my latest adventure: learning about gargoyles and grotesques. (Which is pretty much what all the Dilettantes looked like after a one-hour walking tour in the middle of a monsoon.)

Also, please visit So...what else? by Sarah Lindahl. She is brilliant, gorgeous, and very, very funny. (I'm not just saying that because she talks about how funny she thinks I am in her FAQs.  Though I am egotistical self-centered shallow honest enough to admit that it is at least part of the reason.)

She's funny. She's worth following. Check her out.
Posted by Brutalism at 7:30 PM 1 comment:

While attacking the stack 'o crap in my kitchen this morning, I came upon my notes from BlogHer 2010, written during the humor panel featuring Lizz Winstead, Jessica Bern and Jennifer, which included nuggets of wisdom like the following:
With note-taking skills like that, my solid 1.95 average in college is beginning to make some sense, isn't it?

If you haven't already, read this week's Oakton Patch column. It is my recap of the Oscars. (And has me wishing I had not edited out my favorite line, "even the usually reliable sartorial insanity of Helena Bonham-Carter was absent -- she was wearing basic black.") So please pretend that is still in there.