Almost too late for the 2016 holiday season -- it's the Brutalism Holiday Gift Guide 2016. (Remember how much more timely and hilarious these were in 2013 and 2015? Whatever, 2016 has been a weird and awful year...it's a Christmas miracle I'm hitting publish on this thing at all, besides...what have you done for me lately?)

And on that merry note, here is the Brutalism Gift Guide 2016:

1. Nothing says "Happy Holidays" like polarizing religious beliefs. And that's why the hipster nativity, featuring mustachioed, fedora-ed Segway-riding wise men carrying Amazon Prime boxes, a solar-powered (natch) manger, a 100% organic beef cow eating gluten-free feed, and man-bun Joseph and Starbucks Mary taking selfies with the baby Jesus has divided the public into those who think this is funny and those who think this is sacrilege, for chrissakes.

And apparently, the crowd who finds this funny is voting with its wallets - this is selling to the tune of 500 units per day. #blessed
2. But enough divisiveness -- the next gift is all about unity, in that it brings together (finally!) the natural combination of Jewish holidays and rap music with the Dr. Dreidel! Sadly, this is just an art piece and not available for sale, because apparently, the artist hates money.

3. You know, anyone can inherit money and real estate, but it takes a special relationship to have the pull my finger farting Santa left to you in a will.

And that's exactly how this favorite Christmas item came to be a special part of the Brutalism Christmas - bequeathed by Mr. Brutalism's grandfather - an impeccably-dressed, charming, Italian-American who installed curb feelers and semi-truck back up beepers on his boat-sized Cadillac.He also told off-color jokes through his electrolarynx and once presented me with a platypus belt he had crafted (clarification: a leather belt with hand-tooled imprints of platypi -- not made of platypus).

Every year, we unpack the Santa and every year we share our favorite stories of Grandpa Carmen while listening to flatulent Santa say, "Now that's a real stocking stuffer."
4. Bear Spray 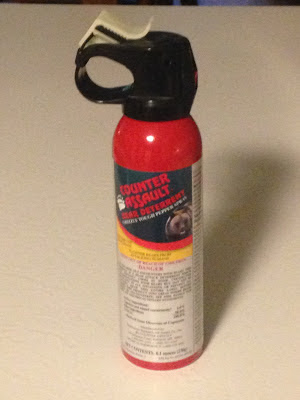 There are two separate instances when I've been relieved to have this in my possession -- and neither of those involved bears (#ironic). There was the fear of yurt invaders instance and the drunk-driver-through-the-backyard scenario.

I'm beginning to think that bears are not the real issue here.

This has replaced mace in my purse -- and my purse has been replaced by a small suitcase to accommodate it. (At this rate, I will likely develop a Popeye forearm from carrying this around. Totally worth it.)

5. The gift of fitness. But not some boring old gym membership or exercise equipment -- I'm talking about the gift of fitness that translates into a great story, which is why I suggest the following events:


The Surf 'n Santa 5 miler in Virginia Beach which issues each registrant a full Santa suit so the group can beat the Guinness world record of the most Santas all running together at one time (bonus - it is a twilight run and you get to run through the Boardwalk Holiday Light Show and then go to a party after with 5,000 other Santas).

The Great Saunter - a 32-mile walk around Manhattan every spring. You gotta love a physical endeavor that doesn't even pretend to exert you. We're sauntering. I may train for this by ambling...or strolling...possibly even traipsing. It's possible I might even get ready for this by simply watching a marathon. At least I won't be wearing a Santa suit.


6. A What Would Dolly Do tote
What would Dolly do? Probably not pay $165 for a tote bag, for starters. That aside, I love the sentiment. You may recall my most recent experience with Dolly, which is actually a time that I would have really appreciated her advice. (Or at least her tote bag to help me carry dinner for five.)

7. Emergency shoes - honestly, these might be the best things, ever: 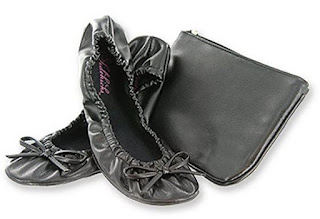 I am old enough to know better, but still insist on wearing shoes like the ones pictured below:
The emergency shoes fold up into a pouch that you can carry in your purse to pull out and wear if your feet hurt from the stupid (read: stylish) shoes you chose to wear.

Of course this invites the question of why not wear the emergency shoes in the first place instead of going through this whole "two pairs of shoes" rigamarole.

(Answer: It's because I don't hate capitalism, pinko.)


8. Epsom salts - these are not just for your great grandmother anymore. A fitness professional who tortures me three times a week just recommended soaking in these as the perfect cure for sore muscles. And they are magical. 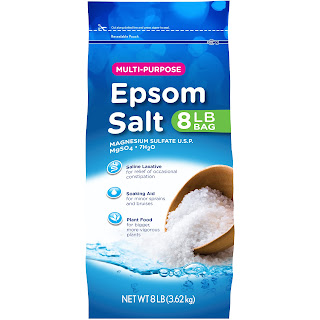 However, when I first went to the store in search of this product, I was embarrassed to ask where it was -- and rightfully so, it turns out, as the Epsom salts are located near the canes, corn pads and reading glasses.

All I know is that my love for emergency flats, soaking in Epsom salts, and using the word "rigarmarole" seems to indicate that training for something called "the Great Saunter" is very on theme...

Of course, there are also hundreds of others including David Bowie, Prince, Dolly Parton, Ol' Dirty Bastard, Christopher Walken, Star Wars characters, Billy Joel and (rather inexplicably) the "Pam" character from "The Office."

Fingers crossed for 2017,
Brutalism
Posted by Brutalism at 3:41 PM No comments: