Thank You, Sis, May I Have Another?

I rarely write about my sister, because, frankly, I barely know my sister. That's by design, as the following was one of the many incidents that defined our relationship early in life. As the freak show that I was in my adolescence and early twenties, I overlooked most of the psychological torture because I just wanted her to like me. I, apparently, was a total idiot. Anyway:

In elementary school, a teacher had asked my sister to draw a picture of her family. And she did. She came home proudly displaying this piece -- a full-color Daddy with a huge smile on his face, followed by a full-color Mommy with a huge smile on her face. She (the oldest child) came after that, also happy and in vibrant color. As the only other family member, I of course came next in the family line up, right? Oh, silly reader. You're forgetting our cat, Henry. He was depicted next in line. And then? Then it was my turn. A tiny little figure with no facial expressions done entirely in brown.

Don't get me wrong. I find this utterly hilarious (now). I also would love to have it analyzed (though I'm pretty sure I understand the intent). Or maybe just keep it folded up in my purse to offer as rebuttal to the people who think I'm damaging my daughter by not providing her with any siblings...
Posted by Brutalism at 12:19 PM 6 comments:

The Times They Are A-Changin' 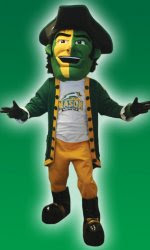 Old George Mason University mascot, Gunston, on the left. New George Mason University mascot on the right. Me? Right in the middle. There is something so adorably muppet-like about Gunston. However, adorably muppet-like doesn't generally intimidate the opposing team. Not like the flabby Budweiser-beer-drinker-favored face painting on the new mascot does, anyway.
Posted by Brutalism at 3:19 AM No comments:

So Dead On, It's Scary

Me, defined by Urban Dictionary:

1. kathleen
a funky ass chick who puts out with a hot attitude.

friend 1: did you have fun last night
friend 2: yeah we got it on she's a real kathleen
Posted by Brutalism at 12:34 AM 4 comments:

Many years ago, my friend, Hillary, and I began celebrating Christmukkah together. This began with some lofty goal of exposing the other to our different religious holidays, but really was just a reason to try and amuse the other person. (Done by deciding upon some random craft that each of us had to do and present to the other --involving some bizarre assortment of components. One year, we had to incorporate the largest pair of underpants we could find into a holiday diorama. I paper-mached (underpants mached?) a huge pair of white underpants into the form of a mountain, put a pipe-cleaner skiier on top and titled it "Holiday in Ass-pen". Hillary hung humongous red underpants from an old light fixture for some sort of erotic objet d'art light fixture.)

(Aside: Our relationship is pretty much predicated on nonsense. When Hillary and I worked together at a network security company, she got a musical Furby in a happy meal at some point. One day, I tasked her with coming up with a marketing department theme song set to the tune that the musical Furby played. And no, we were not the most productive marketing department. Thanks for asking.)

After having been away from Christmukkah for a few years, we are bringing it back this year. It is high time our children began participating in this tradition. We will meet on December 20th this year and celebrate in the following way:

Each team (Berman/Canedo) must come up with five items -- totaling $20 or less -- that represent a commonly-known holiday carol. The other team will try and guess which carol is being represented by the five items...and of course, get to keep the items as their Christmukkah gift.

The following items must come to the Christmukkah celebration:

I will wet my pants if we come up with the same song/ideas. And yet will not be surprised at all.
Posted by Brutalism at 5:34 PM 2 comments:

Back story: In the planning stages of my semester in London reunion this year, the group was trying to find John R., one of the guys from the group. It had been a long time since anyone was in touch with him and all our leads were turning into dead ends. (And...he had lived all over the place in the past 20 years -- DC, Chicago, California...) After extensive and exhaustive Internet searches that turned up nothing, another friend helpfully noted that he was on Facebook. (I swear, he was NOT on Facebook when I first looked.) Anyway...we found him and he came to the reunion (he's living in the DC area again). Since the reunion, I had him and another friend from that group to our house for cocktails. This was a couple of weeks ago.

Current story: Yesterday, Avery was busy pulling every single book off the bookshelf in our office. She came across a MAD book with Alfred E. Neumann on the cover (and immediately screamed, "Alfred E. Neumann"...why she knows that is a long story). That's not the weird part. The weird part is that right on the cover of the book, it said, "John R. 460-4855" in my handwriting. Now, I had obviously written that at some point when I was short on paper...but when? and why? and how random that I found this a week after he was in my house for the first time in 20 years? I e-mailed him about this and he did confirm that was an old phone number of his.

Life is strange. (And not just because a MAD book I purchased when I was about eight years old has made it through about 15 moves with me.)
Posted by Brutalism at 4:02 PM 10 comments:

ALUMNI, SHOW US YOUR CORNHOLE SKILLS!
Sign up for the first-ever Alumni vs. Students Cornhole Competition, hosted by the Student Ambassadors and JMU Alumni Association. Join us for free food and show the students how to play cornhole-alumni style! Register today.
Posted by Brutalism at 9:22 PM 10 comments:

Do You Hear What I Hear?

Avery has had a bit of a tough week. Her teacher told me that she was not using her "listening ears" during circle time at school. To which I replied, "Huh? Oh, sorry I wasn't listening." (In the musical theater that continually runs through my brain, that is how things would go -- right before everyone around me would break into a perfectly choreographed song and dance routine). Reality is just not as much fun. Although, there was that one time when I picked Avery up from school and we were in her classroom and she grabbed my car keys. Her teacher said, "Oh, Avery -- are you going to drive the car home?" and I looked at her and said, "Well, it's probably a good idea, seeing as how drunk I am."

Anyway, because I am a parent, I analyze and worry and assume that Avery will be homeless and sleeping on a bench when she grows up because she left her "listening ears" at home two days this week. We discussed this with her last night, and could tell that even as she apologized for not listening and promised that she would listen, she was basically giving us lip service. (I'm alternately frightened and impressed by that, incidentally.)

(Also, last Sunday, after Amanda and I came back from hearing Hillary Clinton speak? Amanda was standing in our kitchen. Avery had obviously missed me and wanted me to herself, in addition to being very sleepy. She looked up at me and said, "Mommy, I want Amanda to go home." And I said, "Um, Avery? Amanda is RIGHT HERE.")

This morning, I braced myself for what her teacher might say to me. And she greeted me with this: "You know, Avery is really emerging as a leader. Even though she is the youngest in the classroom, she really commands the respect of the other kids and they listen to her."

Let's review -- We have a non-listening bossy pants who lacks diplomacy and pays us lip service when we try and discuss areas of improvement for her.

(I'd make some kind of "future politician" joke here, but now that I actually respect our President-elect, I just cannot go there.)
Posted by Brutalism at 2:33 PM 4 comments: