Some celebrate Easter by reflecting upon the resurrection of Jesus. Some celebrate with Easter egg hunts and lots of sugary treats. Still others celebrate by going to a special brunch in DC that provides entertainment in the form of men dressed in drag lip-syncing pop hits (Best. Easter. Ever.)

Me? I am a bit of a traditionalist and celebrate by crafting dioramas out of marshmallow peeps with my Jewish friend, Hillary.

For the past few years, The Washington Post has sponsored a Peeps diorama contest and for the past few years, the dioramas that Hillary and I have created have been ignored like the women at the above-mentioned drag brunch. (See how the Post ruined Easter for us last year and the year before, too.)

This year, were were so hopeful...what with our "Blue Peep Group" diorama on which we had worked so tirelessly... 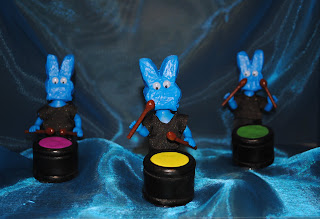 ...and yet, once again, we did not even make the finals. I think this year is when we finally make good on our threat of leaving a flaming bag of peep on the judges' doorsteps.

Resurrect THIS,
Brutalism
Posted by Brutalism at 2:39 PM 24 comments:

My Irish co-worker just walked by trying to sell some extra tickets she has to the Celtic Women concert tonight.

As part of her marketing ploy, she said, "It's St. Patrick's Day...what could be more Irish than seeing the Celtic Women in concert?"

And I said, "I don't know. Drinking fourteen pints of Guinness and urinating on yourself while seeing the Celtic Women in concert?"

Your Goodwill Ambassador to the UN,
Brutalism
Posted by Brutalism at 6:18 PM 3 comments:

Laser? I Just Met Her.

It was a weird weekend. And not just because I spent part of it sitting in a room full of strangers wearing Saran Wrap underpants.

Perhaps I should explain...

For a few years now, I've been thinking about getting laser hair removal for my most intimate of areas........my armpits. (Stop judging and let me know what your most intimate area is after 11 years of marriage. You have to get creative.)

[Due to the sensitive nature of what I am sharing, the overuse of "air quotes" begins below. "Thanks."]

I'm actually referring to my "bikini area." I have been thinking about getting this lasered for a few years now and finally decided to go for it...in the blissfully ignorant way that I make most decisions that cost a lot of money and have the potential for extreme humiliation.

Turns out, this is no simple procedure...it is a process of six treatments over the course of a year. After filling out more paperwork than I had to complete at my house closing, I made an appointment for my first treatment.

Based on the suggestion of the "medspa" where I'm having this done, I arrived an hour early to go into a room and apply numbing cream to my "area" and then wrap the entire area in plastic wrap and sit in a lounge they call the "Sanctuary" while the numbing cream took effect. (This "medspa" offers a variety of services that you'd never want anyone to know you're having...such as Botox and laser liposuction. It conveniently shares a lobby with the Little Gym...so every time I go, there is a good chance I will see the parents of one of my daughter's playmates who can speculate on which narcissistic/insane treatment I'm electing to have.)

I entered the "Sanctuary" which really consisted of three hard-backed chairs in a 6'x6' room (though it was dim and did have some spa music playing) and tried to position myself in a way that the other ladies in the room would not see my plastic underpants and also so that I did not shift and lose the underpants. On a relaxation scale, I would equate this to having your father-in-law read something you wrote about vaginas on the chalkboard in your kitchen or wetting your pants at work.

One interesting thing I noticed while sitting there was that the room in which I applied my numbing cream was right next door, and through the paper-thin walls, you could clearly hear any conversation between the numbing cream applicatee and the technician. As I tend to be overly chatty when I am uncomfortable or nervous, I recalled that when I was in there, I had asked the technician to repeat the procedure for creating Saran Wrap underpants and had also remarked, "Oh...so just like I do at home?" (I suppose they also heard the crickets chirping in the "Sanctuary.")

It felt like I was in the "Sanctuary" forever. And after a few women had cycled in and out, I finally turned on my cell phone to check the time and discovered that it was HALF AN HOUR after my appointment was to have taken place. I poked my head out of the "Sanctuary" door to look for someone and saw no one. So, in my robe, while holding up my Saran Wrap underpants and with a completely numb crotchal region, I began wandering the halls in search of anyone who could help, and found myself in the shared lobby. (And permanently off the play date list...)

They got me into a treatment room ASAP, which is when they really let me know who's boss, by TAKING A PICTURE of the "area to be treated" as a "before" photo. Honestly, this clinician had access to more than my husband did in our first five years of marriage.

The treatment itself took about ten minutes and was pretty painless. Or as painless as it could be while I was naked in a spread-eagle position on the table while wearing dark glasses to protect my eyes from the laser.

So, every two months for the next year, I have this to look forward to.

I wonder if they make a cream to numb the shame?
Posted by Brutalism at 9:35 AM 37 comments:

Many people think the of the DC area as somewhat stodgy and conservative.

I know I did when I first moved here in the 90s. A move I made to assert my independence and advance my career in one of the most exciting areas in the world because my boyfriend lived here.

This was a boyfriend I'd met while spending a semester abroad in London. Theatre was a big part of the experience during that semester so we saw many, many plays. We saw a ton of Shakespeare, got to experience Dame Judi Dench and Timothy Dalton acting in smaller productions, and, as a treat, got to see the Rocky Horror Picture Show on stage.

It was one of the more memorable performances for me because it involved a transvestite and a lot of people in their underpants. (It is these kinds of takeaways that explain why I am not a great playwright and instead write dirty jokes on my little blog.) It was also memorable because out of the entire audience, our group of 30 American students were the only people that did not dress up like the characters in the play or bring props to throw at designated times. There we were, wearing our college sweatshirts amid a crowd of Brad, Janet and Frank-N-Furter lookalikes with their stacks of toast and water guns. We probably should have just stood up and sung our national anthem swaddled in a giant U.S. flag while eating aersol cheese to further underline what a massive group of American tourists we were...though it probably would have just felt redundant. As great as the show was, we totally felt like Octomom at Planned Parenthood...completely out of place.

So you can imagine that when I moved to DC a year later and had the opportunity to again see Rocky Horror on stage with the same boyfriend and two other friends from our London group, we jumped at the chance to do it and do it right. We bought tickets to a ten o'clock Saturday night performance in the District and spent a few days coming up with just the right costumes and getting all of our props together.

We were very enthusiastic (...and very hott, though that really goes without saying): 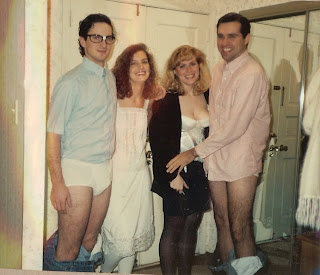 And we were so delighted with ourselves that we spent a lot of time taking pictures and subsequently got to the theatre a little late. James (in glasses) had worn just tighty whities in the car, but right before we walked in, he decided that he would put on his pants until he was seated and the show started. As we made our way down the aisle to find our seats in the dimmed theatre, my eyes began to adjust and it slowly became apparent that I was surrounded by a sea of suit jackets and nice dresses.

You got it. In buttoned-up Washington, we were the only people who had dressed in costume. I have never been happier to be wearing a blazer in my entire life (a blazer that I immediately buttoned up to my neck). And I don't think James has ever even considered wearing only tighty whities to the theatre again. At least that's what he tells his legal clients...

We did not do the Time Warp again,
Brutalism
Posted by Brutalism at 3:12 PM 10 comments: