In addition to Brutalism, it seems that I am writing everywhere else these days. (What a tramp.)

On the Oakton Patch this week, I write about why Santa hates the poor.

At Dilettante Club, I write about our last two adventures: Power stilts and constructing a holiday-themed Peeps diorama (we did Festivus). You can vote for us to win here. (Not to name drop, but I'm totally name-dropping -- Dale McGowan at Parenting Beyond Belief voted for our diorama. And surprisingly, not the nativity scene...)

Hope everyone has had a great holiday -- based on the fact that I have turned into a tub of goo, I'd say I've enjoyed myself a lot.

All I want for Christmas is...AAAAHhhhh! Not that!

I've been methodically unsubscribing myself from gazillions of e-mail lists this holiday season after receiving a mailbox-clogging amount of offers and specials from every retailer on the planet.

And even though Groupon inundates me, I cannot bring myself to unsubscribe from that site, because I love a good deal. 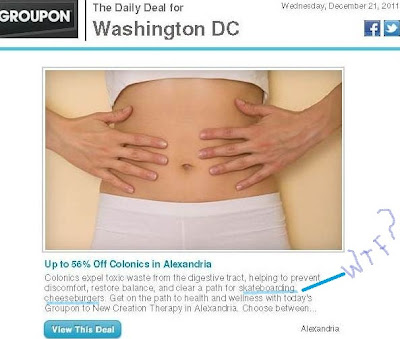 And, again, as the naturally inquisitive type  that I am, I have some questions:

2) This was promoted as a "holiday deal" and they suggested you could not only buy one for yourself, but several others as gifts. ("Merry Christmas, Honey -- this holiday season you are so full of love and joy -- not to mention a metric ton of digested food -- so I figured this gift would be perfect...")

3) Skateboarding Cheeseburgers? How good is the stuff they're smoking at New Creation Therapy?

4) Does everyone else agree that the folks at New Creation Therapy may be enjoying their colon-flushing job a little too much? This is text from their site: The therapeutic center recommends eating a normal meal three–four hours before the treatment and using the time in between to become fluent in a new language.

5) It is things like this that make me want to actively work on my drug addiction.

UPDATE: Seriously, what the hell is a skateboarding cheeseburger? I figured a quick search of Urban Dictionary would answer that and it did not. (Yet it did lead me to several thousand entries under "skateboarding" -- most of which are angry rants against people who don't get skateboarding. I grew up in a beach town where skateboarding was mandatory...are there really places that give kids a hard time for doing it?)
Posted by Brutalism at 3:51 PM 6 comments:

Ahhh...the magic of the holidays. A time for dinner dates with Herman Cain, sartorial rants and plenty of elf martinis.

And that's just the first party of the season...

With apologies to Counting Crows, it appears that it will be a long December...
Posted by Brutalism at 3:37 PM 7 comments: