Chicago is one of my all-time favorite cities - I have traveled there so many times I have now lost count - including for the Chicago Tribune Peeps diorama contest finals in 2011, and a trip in 2004 during which I was inspired to name this blog. In between, I had many fun and work trips during which I fell in love with the city all over again.

It's true what they say...Chicago is a big city with a friendly, Midwestern sensibility - people are so cheery and helpful...with the notable exceptions of those who are causing Chicago's murder rate to spike, and the irate woman who stepped in front of my husband on the sidewalk, gestured aggressively toward me and angrily sputtered, "How about you open her asshole and clean it up...because it STINKS!!!"

Which of course, I found very offensive.

I mean, it's 2016 for chrissakes, I can open and clean up my OWN asshole, thank you very much. I don't need to rely on some MAN to do that for me. Way to set the women's movement back a hundred years, irate lady on the street.

That aside, Mr. Brutalism and I enjoyed doing many of the touristy things we have never done, visiting our favorite museum and showing our daughter around. With that, here is Chicago 2016, what we learned:

1) When a friend suggests bringing all of the postcards from the classic Masterpiece board game to the Art Institute of Chicago to create a challenge for your 10-year-old of finding and identifying those 24 works of art...DO THIS! We ended up spending three hours in one of our favorite art museums and she was engaged the entire time. Brilliant.
2) When possible, ride the El. You can avoid traffic, save some money and feel like locals by riding the train instead of taking cabs. If you want to counteract that feeling of being a local, go to the top of the Willis Tower and do this:

3) If you get a chance to go to a Chicago sporting event - GO! Chicago fans are the best. Especially during a Cubs game that goes to THIRTEEN INNINGS and also during which the two young women sitting next to your husband shamelessly (and drunkenly) flirt with him to the extent that your daughter leans over and whispers to you, "Should I tell them he's taken?"
4) You are obligated to take a photo at the Cloud Gate sculpture ("The Bean") in Millennium Park.
5) You should absolutely take an architecture tour from a boat on the Chicago River to gain an appreciation of the fantastic architecture in the city - including contemporary, art deco, Gothic revival, and (our favorite, natch) Brutalism styles.
6) You will want to try the foods for which Chicago is famous including deep dish pizza, Chicago-style hot dogs, Italian beef sandwiches and Garrett's popcorn. You will then want to try Prilosec and apologize profusely to all of your vegan friends. 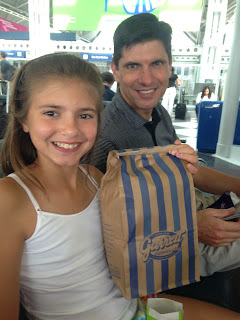 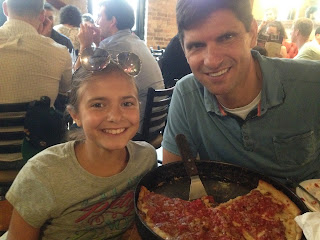 7) You should get tickets for Second City before your trip and not find out later that the (sold out) early show is for all ages. (We assumed it would not be family-friendly, and therefore our #FOMO was sadly realized.) #amateurs #thestruggleisreal #improviseTHIS

8) The fun of a gigantic soaking tub in your hotel suite (look! I'm eight feet tall!)
somewhat makes up for having to call the concierge at 3:45am on the first night of your stay to announce that the bachelorette party entering its ninth hour on your floor is now testing your patience. (A direct quote from me to concierge, "I know it's a Saturday night and I want them to have fun - it's just that the screaming and horn-blowing is now making it hard to sleep.")
9) When traveling with a kid (or really anyone who suffers from general ants-in-the-pantsiness), it is a great idea to run out some energy in Maggie Daley Park.
10) You should plan to schedule a walking tour with Chicago Greeter. We really wanted to do this during our trip, but ran out of time. How perfectly Chicago is a walking tour provided by volunteers to welcome you to the city? Bonus: they probably know the route that avoids the irate woman.