This Is What You've Been Looking For

I recently read the tweet below and frankly, I beg to differ. 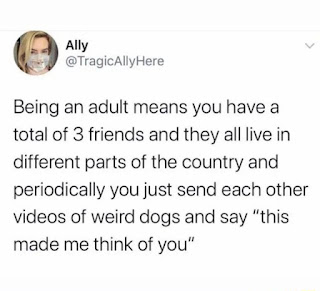 I have a total of TWO friends who live in different parts of the country and we're not so pedestrian that we send each other dog videos. Instead, we find more creative ways to check in.
For example, last night, while in Target buying ingredients for my daughter's pumpkin bread-making date (she and her boyfriend are so ridiculously cute), I came across this lil gem:

So, even though it was a Saturday night and my friend in NYC was likely out doing what cosmopolitan New Yorkers do on Saturday nights, I texted her the photo, with a quick note that proclaimed, "I found that ceramic Dalmatian wearing a Christmas sweater soap dispenser you've had your eye on!"

You know, so she understands I'm thinking of her.

Other acceptable phrasing (with actual real-world examples) for these touch bases includes:

"Here's that [crossed tennis rackets with an inspirational saying wall decor] you've been looking for."

This has gone on back and forth for YEARS whenever the opportunity arises and it never stops being funny.

At least to us.

The 'two friends' thing is making a lot of sense,

Posted by Brutalism at 8:46 PM No comments:

A favorite thing of late is when my daughter comes home from school and shares notable parts of her day - not only because I love hearing what she deems a highlight, but also because her delivery is impeccable.

During a recent debrief, she casually mentioned that while eating with her friends, she noticed a cashew packed in her lunch looked like it would fit perfectly in the ear of one of her dining companions. And because she is a naturally curious child, she felt compelled to test this hypothesis:

I'd heard her mention ol' cashew-ear's name previously so I inquired, "Oh, is this [NAME] you've told me about before?"

I haven't heard such a rant about boys in her class since she derisively explained one of her classmates lined up essential oil bottles on his desk and would select and rub an essential oil into his temples prior to taking a test.

So, she's a little intolerant.

At least it's not of buckwheat.

Posted by Brutalism at 6:53 PM No comments: