I Think I Deserve Extra Credit

Yesterday, I was hard at work playing games at Sporcle and came upon this quiz:

Can you name the words that end in 'cle'?

That included the following questions:

3) Mr. Peanut has one - (to which I correctly replied "monocle")

4) Lance Armstrong has one - (to which I INCORRECTLY, according to Sporcle, replied - "testicle")

Sporcle automatically filled in the answer "bicycle" for me.

I liked my answer better,
Brutalism
Posted by Brutalism at 10:13 AM 9 comments:

What A Pain In The Ass

Today's Oakton Patch column is worth reading. And I'm not just saying that because I wrote it.

It is worth reading because I go off on a bit of a tangent, which is really not like me. And also because I discuss the serial butt stabber who is terrorizing teens and twenty-somethings at a local mall here.

Life in the suburbs is fascinating,
Brutalism
Posted by Brutalism at 3:35 PM 3 comments:

Last night, we went with our friends, Pete and Amy, to see Tim Minchin at the Warner Theater.

("My favorite atheist, Australian, ginger-haired musician/comedian!" as Amy describes him.)

I'm not so sure...though I have narrowed it down to just a few atheist, Australian, ginger-haired musician/comedians and he is definitely in the top three.

Amy turned me on to Tim Minchin a couple of years ago when she gave me one of his CDs as a Christmas gift. He would appreciate that irony.
The show was fantastic -- hilarious, thought-provoking, inspirational, and a lot of fun. Particularly the parts where Tim talks about adopting children from impoverished countries ("I'm not raising someone else's skanky kids.") and love ("Love without evidence is stalking.)

The show also marked the first time I was recognized in public because of my blog and Oakton Patch column. A fellow humor columnist (of whom I'm a big fan) walked up to our seats at the show (second row -- thanks, Amy) and asked, "Kathleen?" and then introduced herself. I don't know if I was more excited to meet her (she's a great writer) or to be recognized (I'm a great narcissist).

Praying for humility,
Brutalism
Posted by Brutalism at 9:47 PM No comments:

Angst. So Much Angst.

I've shared some of my 5-year-old daughter's art pieces and installations before.

So far, I've convinced myself that this is what all 5-year-olds do. (I also assume all 5-year-olds call their moms "Sir" as she has begun doing of late. As in, "How much longer before we get to school, Sir?")

This, following a conversation we had in the car a few weeks ago. After more than a month of not drinking alcohol, I had one beer with dinner -- a 50th anniversary celebration for my in-laws. In the car on the way home, my child said to me, "I thought you weren't drinking beer." I responded, "I just had one...it was a celebration. Is that okay?

And she replied (while looking out the car window, with no small amount of disdain): "Well, I guess if you're okay with it."

But I digress. We recently purchased an iPad, which means that I rock at Fruit Ninja my daughter now has the ability to create and send many more art pieces, which she does...a lot. Every morning when I get to work, I find at least five new creations waiting for me in my in box. Including this one, that I will consider a little testament to the fine job of parenting I am doing: 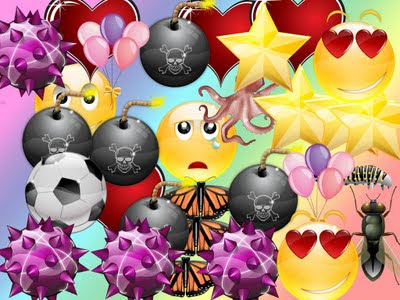 I know I kid a lot about swinging.

I'm kidding, of course. Although I do share my bed with two men.

Making it all seem so much more exciting than it is,
Brutalism
Posted by Brutalism at 4:16 PM 2 comments:

Check out the latest post on my other blog, Dilettante Club - We'll Try Everything Once.

Last weekend, we learned DJing from a professional hip-hop DJ in Baltimore.

We also thought we were going to die, wore Minotaur heads, and urinated with an audience.

Delusion Is The New Black

Lately, I've had a lot of people not a single person ask me, "Brutalism? How DO you do it all? You maintain two blogs, participate in Dilettante activities, write a weekly column, work full time and have (thus far) raised a non-convict.

And I must say, it is all about balance and doing no actual work at work meth.

Another thing that motivates me and is slightly more legal....medals. Read about it on last week's Oakton Patch column.

Also check out this week's Oakton Patch column. The one that discusses my meth Groupon addiction.

Now, if only there was a meth Groupon,
Brutalism
Posted by Brutalism at 2:45 PM 3 comments:

I've shared before the horror that was bikini area laser hair removal treatments and as a result, swore that I would never again subject myself to something like that. My principles go as far as my pocketbook, however, and I changed my stance when Groupon recently offered 90% off hair removal. My husband saw this deal and forwarded it to me with the following message:

Pardon me while I swoon.

He was right, though. I had talked about getting laser hair removal so I could eliminate the torturous and time-consuming chore that is shaving my armpits. I'm now about two Groupon deals away from becoming completely useless. I bought the deal, figuring that arm pit laser treatments would be nothing compared to the humiliation and pain of the bikini area.

This morning was my first treatment. There was no numbing cream (or Saran Wrap undergarments) required for this area (I specifically asked) and I only had to take my shirt off, so I was already feeling way less vulnerable than I had for the bikini area. Until the technician started the procedure and it was all I could do to not jump off the table and slap her in the face. I said, "Wow. That really hurts!" (I delivered this with as much authority as I could, while wearing bright yellow tanning salon goggles to protect my eyes from the laser.)

She asked, "Is it the feeling of being poked by needles that bothers you?" and I replied, "Honestly, over the searing heat that feels like Lucifer himself is shoving a branding iron in my arm pit, I cannot even feel any needles."

I begged for a numbing cream prescription as she continued with the treatment. Then, as we were almost done, something happened that obviously startled her. I asked what was wrong and the rest of the exchange went as follows:

Me (Resignedly): "How about I just hide over here in the corner as I put my shirt on?"

And once again, I find myself facing five more of these treatments over the next year.

Thank you, sir, may I have another?
Brutalism
Posted by Brutalism at 2:33 PM 17 comments:

Saturday, our Dilettante Activity was DJing.

The experience was completely random (as in, we each feared for our life and/or hygiene for at least a moment or two during the activity and we ended the session by taking a photo wearing Minotaur heads).

And I'm not even drinking.

My favorite part of the activity (other than living to see another day and not having to de-louse when I got home) was meeting the cat that lived at the house where we took the lesson. His name was Hubert and he was the biggest, fattest load of a cat I have ever seen. I love fat, orange cats anyway, and he was so completely lovable that I fell instantly in love. (The fact that the bone structure in his face was a little reminiscent of Barbra Streisand is just a tad bit worrisome as to what I am inclined to fall in love with, although millions of gays cannot be wrong...)

Anyway, ol' Hubert and I were fast friends and if I called his name, he would thunder the few feet across the room toward me and then just fall over on his massive rolls of fat, ready to be petted. Once when he did this, I noticed that he was wearing a heart-shaped name tag on his collar, The tag stated simply, "I AM FAT."


I posted this picture on Facebook yesterday because every time I thought about it, it killed me.  And a friend of mine from elementary school then sent a picture of her cat in response...the anti-Hubert:
﻿

﻿﻿The whole "announcing exactly what you are" was rather appealing to me and I chatted with the other Dilettantes about how we could capitalize on this and start our own t-shirt line. (This began with my friend, Amanda, promising that during my wake, she would put an "I AM DEAD" t-shirt on my lifeless body in the casket.) None of us Dilettantes work in hospice care. I know you may find that shocking.

Anyway, we came up with the following additional slogan ideas for our new OBVIOUSO (patent pending) line of casual wear:
Happy to take your suggestions on slogans, too. Although,

I AM GOING TO KEEP ALL THE PROFITS,
Brutalism
Posted by Brutalism at 3:54 PM 4 comments: