I've got a new column up at the Oakton Patch, swingers.

I'm disturbed by the movie I saw last weekend:

Not by the sweat-drinking or the upside-down projectile defecation.. No, that's just good, wholesome fun.

I'm disturbed because I found a lot of the movie tedious.

I don't say that lightly. Back in the day when my husband brought the first Jackass movie home on a rented DVD, I might have made a comment about how stupid he was for wasting his time on that kind of nonsense. (I was apparently in a position to judge because I spend all my spare time reading Dostoevsky trying to find the end of the Internet.) At the time, I had not seen the show, but was familiar with the concept after hearing Johnny Knoxville and the rest of his gang interviewed on the Howard Stern show a few times.

Yet, when he put it in, I was immediately in love.

From the moment I heard the opening music, I was glued to the television. I watched that DVD three times in succession and then promptly bought the DVD and the soundtrack -- which I still contend is one of the best movie sound tracks, ever.

I loved the second installment even more. Every stunt had a playfulness and hilarity about it that was ridiculous and funny and charming all at once. Especially if your idea of charming is someone who will put on underpants attached to a bungee cord and jump out of a tree.

I think I have just given you a lot of insight into the types of men I'm attracted to.

But this one? It seemed to be lacking the lighthearted fun that the first two movies had. It seemed more mean-spirited and well...kinda stale. Also? Not nearly enough music.

It definitely had its moments, but overall...just not the fun romp in the crocodile pit of Jackasses past.

My weekly humor column is up at the Oakton Patch. Check it out here.

(And below is the e-mail I received from my editor letting me know that the column was being posted. This may be the best working relationship, ever):

Why Won't He Just Take Me Hunting Like All The Good Husbands Who Want To Be With Their Mistresses?

10/19 UPDATE: This post was featured on DC Blogs and HippestSnippets today. Thanks, guys!

My husband wants me to keel over and die so he can finally be with the much-younger mistress he has stashed away, like some trapped Chilean miner.

That is the only valid reason I’ve come up with as to why he is making me get up at 5:30am every day to do P90X with him.

For the uninitiated (meaning, the people who can still laugh and cough without severe abdominal pain…>sigh<  I remember those carefree days…) P90X is an extreme workout program that you do in the comfort (heh) of your own home.

This morning (the third morning of the program), I actually pretended I was asleep when he asked if I was ready to get up and do this. Since he knows I am the lightest sleeper, ever, he persisted and I got up and went downstairs for today's exercise session -- something called “plyometrics” (from the Greek "plyo-" meaning "Goddess of Torture" and "metrics" meaning "thank you, sir, may I have another?").

This is a challenging workout. Now, don't get me wrong. We have weathered many challenges in the years we've been together, such as: spending 24 hours a day together during a two-month cross-country road trip, planning a wedding, raising a child, living with my in-laws for six months to afford the aforementioned two-month cross-country road trip, and the current season of "The Office." Interestingly, none of these prepared me for the challenge that is not punching him in the brain when he wakes me up at 5:30 and tells me it is time for an hour-long S&M session...minus the fun part.

His mistress has no idea what she is in for.
Posted by Brutalism at 4:35 PM 15 comments:

My weekly humor column is up at the Oakton Patch.

This week, it is about my decision to have just one child. (It's not what you may think.)

Also this week, I reference poop for the first time in the column. I love milestones.

Cheers!
Brutalism
Posted by Brutalism at 7:54 PM No comments:

My weekly humor column at the Oakton Patch is up on the site.

It is about burglary.

Because crime is a laugh riot.

During elementary school in Virginia Beach, I was part of the gifted program. I like mentioning this because it means that at some point in my life, I was actually considered somewhat intelligent. (Granted, in grade school at that time what qualified as “smart” was probably not eating paste and being so painfully shy that the teachers just assumed you were some sort of genius. But whatever.)

The way the gifted program in Virginia Beach was structured was that you went to your regular public school four days a week, and then one day a week you’d go to another elementary school where you’d have your gifted classes with kids from all of the other schools in Virginia Beach.

As part of the curriculum, we took awesome groovy classes like “Values Clarification” and got to sign up for “Special Interest Units” where we’d learn about specific subjects – anything from hieroglyphics to archaeology to oil painting.

We also had to do contracts, which means we’d share a particular interest or talent of ours with the class once a quarter and then receive feedback on our presentation from our peers. I don’t remember many of mine…but I do remember doing one about carob. (Ridiculous aside: One of my mother’s best friends in Virginia Beach owned a spice company, and one of the products they processed and marketed was carob powder. The friend asked my mother to be the spokesperson, so for a brief time in the 70s, my mother starred in some very low-production-value local television commercials hawking carob.) Somehow, I got involved in this pyramid scheme and ended up proselytizing the benefits of carob to my class. I remember there not being much interest in what I had to say until I pulled out a bag of Doritos that listed carob as an ingredient to share with the class. It was on that day that I learned something that has continued to serve me faithfully. And that is “know your audience” “Americans will always give you a better peer review when you ply them with anything ending in –itos.”

I suppose my real gift was being wise enough to realize that based on how freakishly smart a lot of my classmates were, I was probably the cut off kid; you know…the last qualifier who just barely made the program. Let’s face it, while my peers were taking apart and re-assembling computers, I was mimicking acts I saw on Circus of the Stars. We had an understanding, though. I never questioned any of their BASIC programming or said that Princess Leia was not that hot and they would pretend that I deserved to be there as much as they did.

There was one magical time when I did not feel intimidated by the future Bill Gateses, however, and that was when it was announced that we would be having a field day.

We had one of these in regular school, too. This was the day when everyone participated in standardized physical competitions and ribbons were awarded. There was always the one kid who won the blue ribbon in everything (cough cough…Canetto…) and then there were kids like me, who got second place in jump rope one year and rested on that laurel for the duration of her elementary school career. (YOU try jumping 151 times in one minute, haters.)

But the field day in the gifted program was my day to shine! God knows, the pasty kids who played Dungeons and Dragons and spent all day drawing intricate designs on graph paper whose IQs were approaching infinity had nothing on me when it came to physical activity. (Or lactose tolerance, frankly.) In a hilarious twist worth noting, the administration actually dumbed down the physical events for the field day. Instead of the 50-yard-dash and shuttle run, we had events like sack race and egg toss in deference to the gifted spazzes.

I remember distinctly that on the morning of the field day, I was confident that I would own the events. I would finally earn some respect among my gifted peers in what was sure to be a showcase for my athletic prowess. I would find my niche! I would earn those blue ribbons! I would be a winner! And I continued to live that dream until my egg broke in the first round of the egg toss and I came in third in the sack race.

It took a long time for me to re-gain my athletic confidence, especially because there were more humiliating experiences along the way -- like the time I tried out for the track team in junior high and built up too much momentum while winding up to throw the discus. I spun around so many times and so violently, that when I released the discus, I just kept going until I stumbled sideways and fell over. It's pretty much a given that you will not make the team when the coach asks your name while unsuccessfully attempting to stifle her laughter.

At least I have my hieroglyphics expertise to fall back on.
Posted by Brutalism at 6:26 PM 8 comments:

Worth A Thousand Words 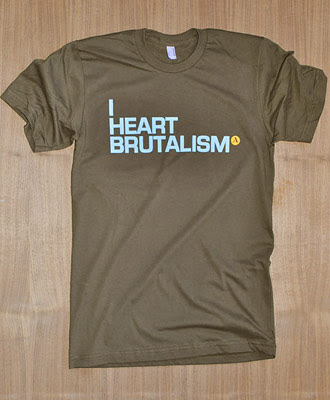 So do I, nerdy artchitecture t-shirt site, so do I. (This is listed on the web site under a section entitled "I love Movements." heh)
Posted by Brutalism at 3:19 PM 5 comments: