When on a phone call with my Mom over the summer, I asked her where she purchased a cute mask she was wearing in a photo she shared. She pulled the phone away from her ear and called to her husband, “Jack? Who’s your mask guy?”

While the rest of the year was not the best (<--- understatement), 2020 began on a high note: we rang in the new year with our cava and grapes at Puerta del Sol in Madrid – the end of a two-week trip through southern Spain that took us to Marbella, Júzcar, Ronda, Granada, Almeria, Madrid, Toledo, Seville, and Malaga. Southern Spain has been on our list of places to visit for several years now, as Mr. Brutalism's grandfather, with whom he was very close, is from a small village near Almeria and landed in upstate New York after coming through Ellis Island in 1920. (Not sure how he felt about leaving the Mediterranean coast for Buffalo, NY, winters but let's imagine all the new experiences were enchanting enough for him to overlook that.)

We learn a lot when we venture out into the world and this was no exception. And even though I've had a year to write this post and nothing but time to do it, I am just now capturing some of the most memorable moments of our trip. So, here goes - Southern Spain, what we learned:

1. When you experience a twinge of guilt for having your daughter miss Christmas morning at home for the first time in her young life, you quickly get over it when she lounges by the pool and on the beach Christmas morning.

2. Spaniards love fried dough with chocolate and they also love their ham. There are many iterations of these ingredients throughout the region and it would be provincial to not at least sample the wares. Repeatedly.

3. When a concierge at the hotel in Marbella suggests you to take a side trip to Júzcar on your way to Granada - do it! Júzcar is a tiny village (pop. 225) that was populated with traditional Andalusian all-white houses (pueblos blancos) until 2011, when Sony Pictures wanted the town to help promote the new Smurfs movie by painting all the houses and buildings in the town Smurf blue. Part of the agreement was that Sony would repaint the buildings after promoting the movie, but the town decided to keep them blue after realizing how their Smurf village became quite the tourist attraction. (More than it was for mycology tours and the annual mushroom fair prior to this.) And while the drive through the curvy mountain roads will have you white-knuckling it - it is worth it for the random and Smurftacular experience!

4. When you watch your 14-year-old daughter negotiate with a street vendor in Spanish to get a better price on the knockoff sunglasses she wants to purchase, you feel a bit of pride. You will feel this again when you watch her understand she should not negotiate with the artist at a Seville Christmas market who helped her select a gorgeous piece of his original artwork.

5. While touring the Granada Cathedral with an English language recording in your headset, and the narrator suggests you look up and then notes, "isn't that a beautiful organ?" it may prompt you to type the following into Google translate:

6. While looking at all the Belen (nativity) displays in the cities you visit, do not assume it is either the jet lag or the vermouth in action when you notice what looks like a pooping figure in the middle of the tableaux. You learn these are Caganers - found in Catalan Belens. You will then embark upon an ultimately unsuccessful quest to find just the right Caganer at the Christmas markets. You will make up for this with this little gem of a gift for Christmas 2020:

7. You discover upon checking into the Aire Hotel and Ancient Baths in Almeria (an 18th century building in the old quarter of downtown that overlooks Alcazaba and the San Cristobal Tower), that the adults in your party are able to use the ancient baths as part of the room reservation. You bid your kid adios and head downstairs for two hours of awesomeness - massage, cold baths, hot baths, steam rooms, and floating in salt water in a completely quiet pool area. (Before you ask - this is all while wearing bathing suits. Something Mr. Brutalism wishes he had confirmed prior to taking off his robe.)

8. If you pull into what looks like a hotel parking lot during the five-hour drive to Madrid so your driver can rest for a few minutes, you may want to ensure the hotel is not actually a "gentleman's club" so when you get out of the car to stretch your legs a big goon will not walk out of the building and tell you to move along. (You will later learn many gentleman's clubs are actually brothels and they prudishly frown on minors visiting their properties.) 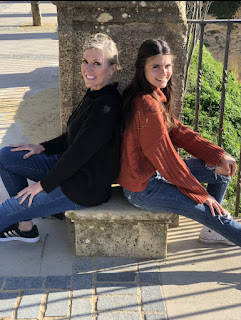 Posted by Brutalism at 8:31 PM No comments: 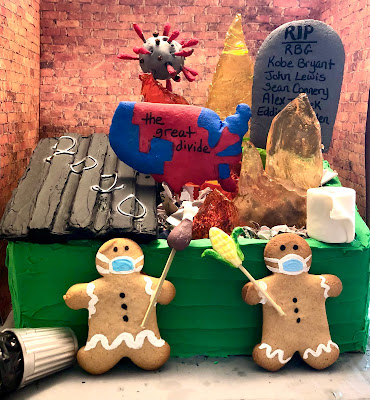 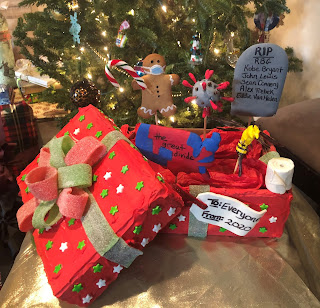 ...and re-imagined for company's holiday contest.
Posted by Brutalism at 2:37 PM No comments: