I came to know John through his wife, Meredith.

Meredith and I met when we were in our 20s and dating guys who lived in the same row house in DC. We eventually outgrew those relationships and grew into ours, and she became one of my very best friends.

Lore has it she and John met on New Year's Eve 1999 when Meatloaf was performing at Madison Square Garden. Meredith had been selected from the crowd of thousands at the concert to join the band onstage during the song "Paradise by the Dashboard Light." (Things like this happen to Meredith all the time - her life is a series of bizarro incidents that sound made up but are not.) When John spotted her on stage, he turned to the friend he was with and proclaimed, "I'm going to marry that woman." (The reality is they'd met one other time prior to that, but this telling makes for a better story.)

When they started dating soon after, I asked about him and she told me he was a comedy writer. As Mer is one of the world's funniest humans and provides almost-constant comedic fodder, I figured this was a perfect union.

And in many ways, it was. They moved from NYC to LA and back to NYC - following writing jobs for which John was hired. As a native New Yorker and part of the comedy world, John had a community of comedian and writer friends who, if you didn't recognize their names, you'd definitely recognize their work. I got to know some of this crazy, creative circle during visits to see John and Mer, which at times included taking the train to Coney Island to ride the Cyclone, going out to restaurants, or just hanging out in their apartment. This circle grew to include my daughter, my Mom, and assorted friends I introduced, who immediately (and understandably) liked John and Meredith better than they liked me.
By any measure, John is an impressive guy. He graduated from an Ivy League school, received an Emmy nomination for his writing on "The Chris Rock Show," published a novel, did stand-up comedy, and wrote and produced the Writers Guild Awards in addition to many other notable writing and performing credits.

Additionally, John knew more about music than anyone I've ever met. And not only knew music but was, himself, an accomplished musician. (He and I shared a love for the Ramones. One of my favorite memories is when we were at a relative's house following Meredith's mother's funeral, and John sat down at the piano during the gathering and began to play what sounded like a classical music piece. After a few moments, I realized he had actually slowed the tempo and stylized one of my favorite Ramones songs - then looked over, gave me a sly smile, and continued with his performance.)

Other favorite memories of John are:

- On the way to my cousin's wedding on Long Island, I absentmindedly left my phone on the train. A Samaritan located and turned in the phone, but the LIRR would only allow it to be picked up in person, they would not ship it. John offered to head to Penn Station from their apartment (not a short trip) and send the phone back to me in Northern Virginia, which he did. While I know it was inconvenient and required a lot of logistics, he made me feel he was happy to help

- When Meredith and John had to move their wedding from Malibu, California to Orlando, Florida very quickly due to both of Meredith's parents being ill and not able to travel, John not only went with the flow, he also embraced it. So many things did not go as planned during the wedding celebration (photographer broke out in hives and left without telling anyone, audio did not work, so reception music was played via niece's Hello Kitty boom box and a microphone, etc.) and instead of either John or Meredith getting upset, they laughed at the absurdity of it all and as a result, set the tone for the most memorable and fun wedding I've ever attended

- When my daughter was born, Meredith came to my shower and presented me with a gift from she and John: a tiny Ramones t-shirt and the following original artwork: 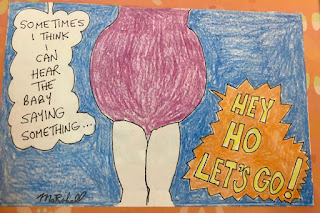 - When I turned 40, John put together a mix CD heavy on the Ramones and other music he knew I'd like

- And perhaps best of all - for Christmas a couple of years ago, Meredith tracked down a (ridiculous, amateur) horror movie she and I had filmed years earlier and John edited and scored the movie as a gift, adding credits and graphics to the video. It was thoughtful and creative and hilarious and so very him

Some of my other favorite John and Mer moments through the years are captured in the posts below:

As I'm sorting through specific memories over the past few days, it's clear that somewhere along the line, John became more than just my friend's husband - he also became my friend.

When John, who had never smoked and rarely drank, got sick five years ago with lung cancer, he and Meredith did not let it define him or their lives. Through the years, I often felt there would be no John without Meredith - she seemed to sense exactly what he needed and was able to provide it and support him in all his endeavors. She took such good care of him always, though particularly in the past few years. When I and others told her how awed we were by all she did for John, she brushed it off, saying it was "what anyone would do." Except it wasn't. It was extraordinary. And the most loving display I have ever witnessed.


The last time I saw John was about a month ago. Meredith cleared with his doctors it was safe to visit as long as I was diligent about hand washing and did not hug him. That weekend, we spent all our time in John's room, told stories, and watched a video some of his comedian friends had created for his birthday. The video was hilarious and very sweet, with each person taking time at the end to share birthday wishes and talk about how much they loved John. When the video ended, John remarked, "there are a lot of people who love me."

As I was leaving the next day, I told John I loved him and that I would see him the following month (my daughter and I were scheduled to do a charity walk in NYC with Meredith at the end of April). Of course COVID-19 thwarted our plans, but we were still hopeful at the time.

On April 19th, Meredith called to let me know John had passed - at home with her, his Mom, and their dog, Baxter, snuggled up next to him - as always, surrounded by love. 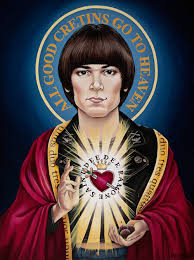