First of all, apologies to the National Zoo for erroneously listing this event as "Snore 'n Roar" on my Facebook page. I hate the apostrophe N almost more than I hate people spelling C words with Ks (Krispy Kreme -- I'm talking to you!) and yet, I saw one where none existed. I'll blame the marketing profession in general (those krazy kards).

That aside, this is one of the coolest events I've done in the DC area. We signed up for the "Commissary" tour when we originally decided to do this back in April ("We" being me, Hillary and Hillary's mom, Nancy.)

On Friday, I met up with Hillary and Nancy at 5pm at the Zoo, where we brought a picnic and dined for an hour before the event began. (Hill even managed to sneak in a bottle of wine -- don't tell the Smithsonian.) At 6:00pm, we met up with our tour guide and other group members and received our tents. We selected our campsite (near a lovely waterfall) and set up our tent, then regrouped to begin our tour. (Being the seasoned campers that we are, Hillary brought a Strawberry Shortcake sleeping bag, Nancy brought a pillow in a white eyelet pillowcase, and I completely forgot a pillow and the pump to blow up my queen-sized air mattress.) 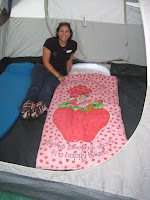 We toured the commissary, which handles all of the food delivery, processing and distribution of food for every animal in the Zoo. Two animal nutritionists (two of only fourteen in the entire country) led the tour and were so interesting and interested in their jobs. We learned a lot, asked a lot of questions and did a few hands-on activities. We also got to go into walk-in freezers where we saw things like frozen whole rabbits in individually wrapped packages -- still with their fur and everything. That creeped me out more than a little bit. 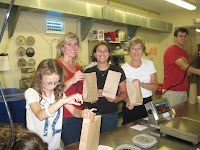 At the end of the tour, there was a scavenger hunt in the facility. Being the freakisly competitive people we are, Hillary and I developed a strategy of splitting up and also not lingering in front of clues, so as not to give any information away. We kept doing recon missions and then reporting back to Nancy who stayed in a central location to record answers. (Please keep in mind that our competition in this hunt was a bunch of parents with their eight and nine-year-old children. It was very important that we win.)

We did win and documented our dash across the finish line...only to find out there was no prize. (Well, other than the satisfaction of knowing that we kicked some elementary school ass.)

After that, we got to take a flashlight tour of all the nocturnal animals. It was awesome to be at the Zoo at night with very few other people.

The next morning, there was another scavenger hunt planned for us that gave us a pretty good walk around the Zoo. This time, there was a prize, but we were beaten by another group. (It was a very "Amazing Race" moment as we crossed the finish line and realized that someone else had come in first.)

Anyway, I had to sleep for about three hours when I got home. Not the comfiest night's sleep I've ever had...but a very, very cool event otherwise.

A couple of days ago, I signed up for our next Zoo even -- a "Cool Cats" tour and activity for Avery on a Saturday morning in November. (Which should assuage some of the guilt I felt when telling her I was going to go away over night for Snore and Roar. She asked, "you're going to the Zoo? Can I come?" and I had to reply, "No. This is not for children."
Posted by Brutalism at 4:49 AM