We Met The Law And The Law's Fun 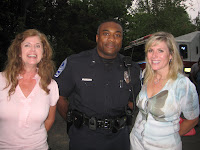 Last night after work, I went to dinner at my friend Terri's house. (Lemon pepper pasta with shrimp, feta, fresh spinach and tomatoes...>happy full sigh<.) After dinner, we went to her annual neighborhood ice cream social that was being held in a community park nearby. [One of her neighbors is the mayor of Fairfax -- he was also in her high school graduating class at Fairfax High -- he also owns The Sweet Life Cafe in Fairfax, so he provided all the ice cream for the social. Everyone in Fairfax City is connected in some way -- which was underscored when we spotted the mother of the VP of my company (company is located guess where? Yes, Fairfax) scooping ice cream for the neighbors.]

We mingled, we met neighbors, we patted dogs...it was really pretty fun.

But the best part of the evening was when the policemen and the firefighters showed up -- we had so much fun with them -- especially one firefighter named Andy who was totally sarcastic and hilarious. At one point during our chat with him, he took an important call from his Chief. Apparently, they compare notes on which of these neighborhood gatherings is most fun and the most senior members of the team get to go to the good ones. (Last night was some kind of national neighborhood night out or something, so there were twelve of these scheduled in the area.)

I requested a plastic fire hat from another firefighter (he was handing them out to the kids there), telling him that I had a three-year-old who would love it. His response? "Suuuuure you do."

We ended our evening by asking a nice policeman to take a picture with us pretending we were perps who were getting arrested. He obliged, but did request that we don't put it up on "some crazy web site." Apologies there, officer.

Posted by Brutalism at 1:47 PM