I just spent the past four days in Harrisonburg, Virginia -- a lovely area in Virginia's Shenandoah Valley where I went to college -- JMU, but only because Eastern Mennonite University would not have me. Something about my sinful love of patterns or something... ("I am totally going to hell" aside: There was a Mennonite girl who went to my high school. Because we were totally accepting of people from all different backgrounds, we referred to her all through high school as "Girl With Thing On Head" and even used a shorthand of "GWTOH" to reference her...which we did...often.)

Right now, GWTOH is somewhere looking at this: 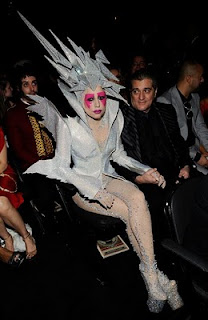 and thinking, "Right. And you called *ME* Girl With Thing on Head?" (And by the way, she could have totally referred to me during high school as FTOG -- or "Fat Tub Of Goo," the fat being a reflection of my spiritual life...the one where I worshipped at the altar of Little Debbie...)

Harrisonburg and the surrounding areas are notable for not only the gorgeous mountain views and institutions of higher learning, but also for the (astonishing) number of "Git R Done" and "I'm only speeding because I have to poop" bumper stickers we spotted in our four days in town.

We spent most of our time at a local ski resort, and a little time in town. And it seemed like wherever we went, we were confronted with those vending machines in which you put a quarter and in return, receive a grimy handful of three-year-old Mike and Ikes . I don't know what it is about these things that attracts a young child faster than Roman Polanski's hot tub, but we were being pestered for quarters constantly by our daughter. To divert her attention, we found a toy vending machine and gave her some money...which is when she became the proud owner of the cheapest possible knock-off version of Billy Bob teeth.

She played with these all night and all the next morning. When we went to breakfast at a local place, she put the teeth in and smiled at the waitress...a waitress who smiled back with the EXACT SAME TEETH.

Gittin' R Done,
Brutalism
Posted by Brutalism at 2:09 AM

I prefer to think of Harrisonburg as the regional center of the Truk Nutz cult. Though it is also home to WBOP-FM, which may be the least appropriate radio call sign anywhere on the East Coast.

so there's more to Harrisonburg than sticky bars and the Waffle House at 3am? Or maybe that was just my experience... have I said too much?

I've got to have that poop bumper sticker. I would wear it around my head when I ran b/c the fact that I have to poop actually propels me home in a way speedier fashion than if I didn't have one at the door.

Those TEETH!! My kids love those disgusting teeth from the vending machine. I went to JMU so I know that townie you are talking about with the bad teeth. Perhaps there is more than one.

You let her WEAR those things?

"..and that's how my daughter got syphilis."

Nice parenting, mom. At least coat them in bleach or something first. Christ. Use your head.

so are these stickers widely available? Betcha they'd be popular in Manhattan where I live.

Sean - Harrisonburg has its charms (see sticky bars and Waffle House at 3am as noted by Dori below...) WBOP is fantastic.

Moooooog - It does take a village. Thank you. Off to buy bleach now...

Uzi - Those bumper stickers just scream "I am a Manhattanite." Nice thinkin'

I'm a little disappointed that Miss A did not seize the opportunity to point out the similarities in the dental work. A real "kids say the darndest things" missed opportunity.

Tante - She has made up for this missed opportunity in various other ways -- like asking me at the doctor's office why a woman had only one leg, for instance.

YMY - It is. And for the same reason farts are. It stinks and it comes out of your butt.

I'm assuming that doctor's visit will make it into a post sometime? That kid is an endless source of comedic material.

"Girl With Thing On Head" reminds me of a Smiths song. One of my favorites (well, aren't they all, really? Even "Vicar in a Tutu." It's not strange.). It's about intolerance in society.

Where can I get the "poop" bumper sticker?

I think Giterdun should be your new blog taglines.

And DUDE vending machines are like vegas for kids. Open 24 hours, taking your money and givin' crap in return.

I'd be pissed if I were the person sitting behind that train wreck.

Ask and ye shall receive: wipe me