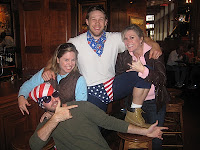 Also a story for another day,
Brutalism
Posted by Brutalism at 11:23 PM

hahahaaaa! I'm am thrilled to report I know some of these characters through you, so I'm cool-from-the-sidelines-once-removed! I'VE ARRIVED!

The dude in the bandanna looks like that fisherman from last month...perhaps he is stalking you?

I heart "tic tac toe" lady. I would say more, but you are so almost-famous I am now intimidated.

Sarah - It's a gang sign for my gang. The Palsies.

SloanGroup - I didn't even think about that, but now that you mention it...he is showing up in some weird places. (He was in my driveway this morning, f'rinstance.) I thought it was merely coincidence.

Kath - Tic tac toe lady rocked. And you should be intimidated.

Dude. I hope there are many more days. :) Your life gets more interesting by the minute!