Like many people, I prefer experiences to things when it comes to receiving gifts. Of course, it’s rather challenging to plan experiences during a pandemic, so it is a testament to my husband’s gift-giving prowess that for Christmas, he presented me with an all-inclusive pass to the virtual Sundance Film Festival 2021.

The film festival was this past weekend – so after a weekend comprised of our selection of ten full-length features and 20 shorts (and assorted Q&As with filmmakers and actors) – I bring you “What I Watched: Sundance 2021” with my completely amateur assessments of the most memorable films as determined by me. Enjoy!

John and the Hole – Michael C. Hall – the guy who played serial killer Dexter -- now plays an affluent and uninvolved Dad whose 13-year-old kid drugs him, his wife, and their daughter and keeps them trapped in an underground bunker for about a week, while the kid lives life on his own terms, using the family’s house, money, and car to maintain his schedule and buy food. (SPOILER ALERT: when he finally helps his family out of the bunker, there is no explanation for why he did this. I do not care for ambiguous, nebulous movies like this – particularly after such an intriguing build up. There is no “why” except possibly flashbacks involving what appears to be his Mom when she was his age may have something to do with it? I presume it is supposed to be unsettling and thought-provoking for the viewer. If so, achieved.)

Rating: Spoon-feed me, please - B-

On the Count of Three  - I unfairly likened this to the male version of Thelma and Louise, which is not at all accurate, but helps provide some sort of context. The two leads have amazing chemistry as best friends and you root for them through the entire film – even (especially?) when they run afoul of the law and Jerrod Carmichael delivers lines such as, “Hey, man – thanks for hitting my dad with a tire iron. You’re a good friend.” Even though this is heavy material (a suicide pact, mental illness, child molestation), it is darkly funny and very sweet. Tiffany Haddish and Henry Winkler make brief but meaningful appearances.

Rating: Buddy movie with a twist - A

Homeroom – Oakland, CA kids organize and rally to remove police from their schools, who are not only threatening and triggering for the primarily black and brown kids in the school district, but whose funding is also taking away necessary programs and services from this same population. The tragic murder of George Floyd occurs during the filming of this documentary, which ultimately helps persuade the school board to vote with the kids after initially not supporting them.

Rating: Hopeful for the future – A

Rita Moreno: Just a Girl Who Decided to Go For It – 87-year-old national treasure Rita Moreno has joie de vivre that makes you love her from the minute the film begins and leaves you wanting more when it ends. After describing how Moreno overcame numerous obstacles including racism and sexism to seemingly embody the American Dream of struggling to achieve great success – this filmmaker posits, “and what could she have achieved had she NOT had to deal with that?” It is a deeper look into Rita Moreno’s life, tribulations, and a more complete picture of entertainer-as-human-being, including her early and continued activism, her relationship with Marlon Brando (about whom she delivers a perfectly timed line that made me laugh out loud), and surprising honesty about what looked like her perfect marriage. And at 87, she’s still working, wearing heels, dancing, and celebrating life on her terms.

Rating: Hey, you GUUUYYYSSSS! She’s the best and this was well done - A

Try Harder! – as the parent of a teenager who will be applying to college in a few short years, this film resonated with (and by “resonated with”, I of course mean “scared the crap out of”) me. It follows kids from one of the most selective public high schools in the country as they navigate their high school years and college application process. These kids have taken all the AP courses, have weighted GPAs of 4.5 or higher, and have sacrificed sleep, friendships, social lives, and many ‘normal’ high school experiences in the hope of being admitted to top-tier schools. (Most of them view Stanford as the gold standard, as this is a San Francisco-area school.) It turns out that when you are one of many kids with the same stellar resume, Stanford is simply not interested. Nor is Yale, or UC Berkeley, or Harvard. It is an interesting commentary on ticking all the right boxes to succeed, and it not being enough because it has made you the same as everyone else.

Rating: Be yourselves, for the love of God - A-

Human Factors – see “John and the Hole” above – are there repeated home break-ins? Aren’t there? What does this mean to this family and their lives? Do I even care?

How It Ends – a full-length feature comedy with cameos from every person you’ve ever seen on screen - such as Rob Huebel – the guy who is in everything, including my favorite meme:

This is a lighthearted and surprisingly warm and funny narrative about the last day on earth before a meteor wipes out humankind. Interesting aside: it is filmed in LA during the pandemic - so none of the actors are closer than six feet together but it is not part of the story line. (Learned that in the Q&A and didn't even notice it when watching the film.)

The Sparks Brothers – billed as a documentary about “your favorite band’s favorite band” and “the greatest band you’ve never heard of.” And admittedly, I’m in the group uncool enough to have never heard of them. It made me miss John Marshall terribly, as he would not only have known their library of songs and been disgusted I didn’t, but would have also pointed out why I was incorrect in my assessment that no one has heard of them because their music is TERRIBLE. If you know this band, and particularly if you like this band, please explain it to me. The documentary was well done – I just don’t get the appeal.

Rating: In tribute to the avant-garde-ness of the subject matter, I rate this film: cucumbers

Street Gang: How We Got To Sesame Street – you’ll laugh, you’ll cry, you’ll still be able to remember every song and segment from this wonderful show. Delightful to reflect on a bunch of smart, creative people doing something that mattered and continues to matter.

Rating: Today’s letter is - A+

Searchers – documentary about online dating in NYC. I’ll save you the two hours: it’s dehumanizing. Interesting filming – but way too long and not sure we gained any new insights.

Wiggle Room – easily my favorite of all the shorts. The film focuses on a young woman who is seemingly invisible and powerless due to being poor, a minority, a woman, young, and disabled due to an accident. When she treks to an insurance company to follow up on a long-delayed payment for a wheelchair ramp her coverage is supposed to provide – she proves just how strong she is in a way that will have you cheering for her and thinking about this short many days after watching it.

A Concerto is A Conversation – I lied. This was easily my favorite of all the shorts. This film is a conversation between a 91-year-old black man and his grandson – about growing up in two very different times and both realizing different kinds of success (the grandson’s due in large part to obstacles faced, hardships overcome, and choices made by his grandfather). It is devastating (though unsurprising) how much racism and how many obstacles the grandfather was faced with, and instead of being defeated, was inspired to find different paths to his success. Harkening back to the Rita Moreno film – imagine what he could have achieved if he didn’t have to deal with that.

Rating: This is just fantastic all around, and the interesting choice of using two cameras for close ups was brilliant - A+

You Wouldn’t Understand – I didn’t. I think it was about time travel and lasers and a pricing gun being used as an actual gun and interrupting a gentleman’s picnic.

Rating: SBH (Should Be High to watch this)

The Field Trip  – depressingly accurate perspective of what corporate America looks like through the lens of kids spending half a day living it during a fifth grade field trip to Junior Achievement Biz Town.

Rating: I think we should amplify this through our channels and think outside the box – A

When We Were Bullies  - husband and I had differing opinions on this documentary that revisited a bullying incident the filmmaker took part in 50 years prior at his Brooklyn, NY, elementary school. He tracks down and interviews classmates and even the teacher for their perspectives on the incident. I wanted more remorse from those involved and less focus on them and more about the kid who was bullied (the filmmaker said that was the original intent, but he changed his mind). Stylistically, this was great. But if you’re going to the trouble of tracking down the bullies - I need contrition and growth. If not, I don’t need to hear how this affected the kids doing the bullying – I know they are way less traumatized than a child being jumped and pummeled by a crowd.

Rating: They should all get wedgies - B 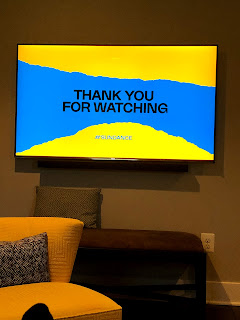 Two enthusiastic thumbs up,
Brutalism
Posted by Brutalism at 6:07 PM