One time in an interview, someone asked me what were the most important things I had learned in business school. I replied, "That it's a great place to meet guys with jobs and that if I ever hear another person use the word "synergy" I shall be forced to throttle them." "How to negotiate effectively and the importance of surrounding myself with smart people."

Those lessons have helped me in many situations throughout the years -- most recently, the Post Hunt 2009 in which I participated yesterday as part of team Velvet Unitard. (After not winning, we amended our team name to Crushed Velvet Unitard, and no, it has not stopped being funny.)

Fellow VUs were Amanda and Leon (who faithful readers of Brutalism may know as Dilettante07 and Dilettard07, respectively). They share a combined IQ of somewhere in the infinity range, a life, and a ridiculous sense of humor. We trained separately by doing many word games and also studying clues from prior Tropic Hunts and last year's Post Hunt. We also drank a lot.

When we met up yesterday at Freedom Plaza in DC just before the Hunt began at noon, we were pretty excited. And not just because Gene Weingarten agreed to take a picture with us, although that was a huge part of it. (Aside: I reflected later that in the past few days I had touched three famous men -- Joe Frazier, Jeffrey Ross and Gene Weingarten. That is a famous-man-touching personal record for me. Well...if my mom is reading this, anyway.) It was total nerdvana.

Our first stop for clues (the human statues) just frustrated us. None of us had any idea what the answer was and we were beginning to wonder what we were doing there. However, we (and by "we", I mean "Amanda") solved the next two puzzles (failed monuments and the congressional debate) in mere moments and then we were addicted. The next couple of puzzles (the watch guy and commodities) were a total group effort -- it was amazing how helpful it was to have different perspectives on these things. Then, Leon came in for the big finish by doing the correct mathematical calculations (my eyes had glazed over at this point) and coming up with the solution to the statues puzzle.

We had the answers to the five puzzles by 2:15, so we took a break for lunch and a beer. At 3:00, we returned to the stage for the final clue and were halfway to solving it when we heard the winner being announced. Next year is ours.

(And you're welcome for the post title, fellow Unitards...) 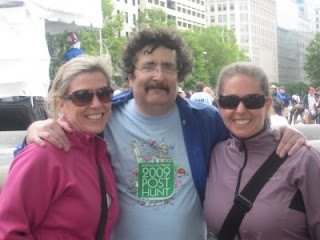 Posted by Brutalism at 6:01 PM

Tante -- Sorry. I meant to clarify. He did remarkably well for being slightly smarter than a turnip.

Wow. I am in awe of your puzzling powers AND your famous guy touching prowess. Wow.

I should note that Dilettard07 was not wearing a pink or purple windbreaker. In case we were victorious I wore one of my signature Indonesian shirts. I figured Dave Barry would have liked it.

In other words, there was no team uniform, although the picture makes it seem otherwise. But it did make finding these two much easier as they often left me behind (at my own direction) taking notes on useless things that had nothing to do with the clues.

I was sure the Ben Franklin statue was telling me "five dollar foot-long" and that the statue puzzle answer was either 512 or 12. Well at first at least.