Next Year, They're Hiring Angry Men 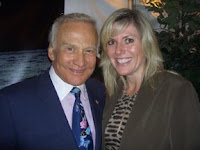 Tonight I get to meet Buzz Aldrin.

My friend, Hillary, works for a PR firm that hosts very cool anniversary parties every year (they're pretty small, intimate affairs held at an Irish pub). Last year, for their 10th, they hired Bo Derek (she starred in "10" -- get it?) to come and mingle. This year, for their 11th, they've hired Buzz Aldrin (he piloted Apollo 11-- get it?). Even though he's not nearly as accomplished as Bo Derek, I'm pretty thrilled to meet him.

Doing a little research on him today, I found out his mother's maiden name was "Moon" -- that's fantastic.

Hopefully, a picture of Buzz and I will be in this post tomorrow.
Posted by Brutalism at 1:48 PM