It's Not Just A Job, It's An Adventure 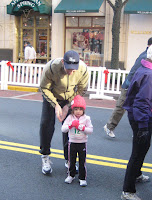 Since Avery had such a fantastic first race experience doing the Goblin Gallop, I was so excited to register her for another. So on the Friday after Thanksgiving, she was all set to do the "Run with Alan Webb" at Reston Town Center to raise money for the Neediest Kids organization. (Alan Webb is the Reston hometown hero who holds the American record for the mile -- 3:46 -- the kid is a machine.) Because we were so excited about how much she loved her first race, we had invited her Grandma and Grandpa and also Aunt Lisa, Uncle Rob and cousin Cameron to watch her, too.

We showed up at Reston Town Center, got Avery's race number secured on her jacket and got her and Canetto all lined up with the other runners to begin the race. Seconds before the gun went off, Avery began having a tantrum. She took off at about a million miles an hour in the opposite direction of the race course. Somehow, she managed to tear her hat off and then in the ridiculous tantrum-style run that she was doing, her mittens also flew off. Tim looked back at me and burst out laughing, then ran after her.

Somehow, my 30 pound daughter managed to run to Talbot's, yank open the (very heavy) front door and race to the rear of the store and into a window display, where she retreated into a far corner and tried to hide from her dad. (I was outside documenting the entire thing on film while simultaneously wetting my pants.) Tim ran after her into the store and a saleswoman said to him, "you know, we really don't like kids climbing into the window displays," to which Tim replied, "you know, that's a coincidence, because I really don't like her climbing into the window display, either."

Tim did manage to get her out of the display, but she never did do the run. A few minutes later, she said to us, "I'm sorry I was so cranky this morning."

Still no idea why the tantrum and the absolute refusal to do the run...especially since she did seem to enjoy running (as fast as she could away from us, but running nonetheless). 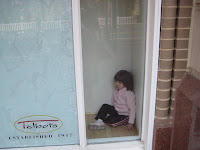 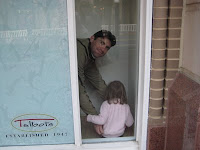 Posted by Brutalism at 6:39 PM

Sweet Avery deserves your understanding, of course. I still can't believe the heartless-as-a-mannequin saleswoman. What a twit. Good for Cannetto keeping his cool.

I love it! I am wetting my pants as well. The photos are absolutely priceless. Any video?

Talbot's? Already? Oh, Avery, I had such plans for your kindergarten wardrobe. Uncle Dilettard was going to take you shopping at Cusp and Barney's.

On the positive side, I guess you're getting a head start on your Wellesley interview.

I know. The choice of store upset me almost more than the tantrum. What am I raising? Next thing you know, she'll be looking for sensible shoes...the ultimate rebellion.