Subtitle: Well, she started it.

There are lots of adorable children in Avery's classroom. And one royal brat. There's always one. The one who gets in everyone else's face and the one who tells other little girls that they cannot play doll house unless they, too, have a ponytail. She's a big kid and rough and mean. A royal brat (have I mentioned that?).

This morning, when I dropped Avery off, the kid got in Avery's face. Right in her face...for no reason other than to annoy her. I said, "Stop doing that." Ten seconds later, she was doing it again. I said, "I said stop doing that!"

I then went to put a few things in Avery's cubby, turned back around and the kid had Avery in some kind of bear-hug-against-her-will and was pressing her face into Avery's again. So, I got right in her face and said through clenched teeth, "Listen...I told you to stop it and you BETTER stop it now," and gave her the meanest look I have that goes something like this: 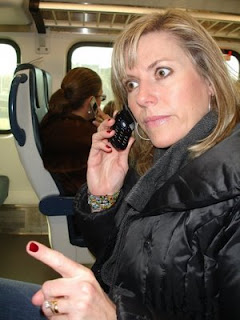 She then ran crying to the teacher.

Christmas really seems to bring out the best in me. This reminds me of a Christmas past when I also got into the spirit of the season.

Happy Holidays Everyone!
Posted by Brutalism at 3:31 PM

I might be able to top that -- two summers ago I called this little punk-@ss kid a dick. He was 4, tops. And he deserved it.

Did i just get that look?

You totally got that look, Lovey Sunshine.