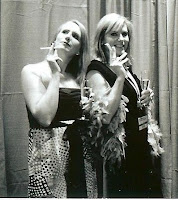 Shockingly, I made it through four days at BlogHer having only one alcoholic drink and no coffee. Those are words I never thought I'd type. And words that probably explain why I felt like I was hit by a Mack truck on Saturday morning after going full-tilt for 18 hours the day before...(Though I did take the edge off by smoking some chalk with Aural Pleasures one night...)
One drink, you ask? What's the freaking point? The freaking point is that until you have a drink YOUR ROOMMATE WILL ASK IF YOU ARE PREGNANT AND WILL CONTINUE TO ASK UNTIL YOU NEED THAT DRINK MORE THAN YOU'VE EVER NEEDED ANYTHING IN YOUR ENTIRE LIFE. Amen.
You see, I'm having some reflux issues which means that for the foreseeable future I must give up all consumables that bring me joy, which are all things acidic: caffeine, alcohol, citrus, chocolate, tomatoes, spicy foods and LSD. It also means that when I meet one of the funniest women on the planet, I do so with Tums in hand. (If I ever get a tattoo, it will state simply, "Born Cool".) 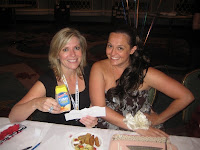 (That's the Bloggess!)
On the second day we were in town, Amanda thought she lost her business card holder (she did...in her purse...) so we visited Jose at the Hilton lost and found. As we were waiting to speak with Jose, we looked around and saw the usual stuff you'd expect to see in a hotel lost and found: about eight zillion power cords, some cell phones, assorted cameras...I also noticed that the office was going through some renovation and there was a huge granite counter top on its side propped against the wall. When Jose introduced himself and asked how he could help us, I told him that I had misplaced my granite counter top and asked if anyone had turned it in. Jose = fun. He appreciated that. And also that we looked on the security cameras in the office to determine where he'd have the best view of us in the common areas of the hotel if we decided to break into a spontaneous dance number. ("Julie, we need you to help us with some choreography.") 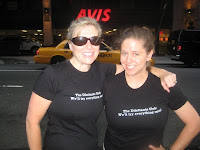 As part of our BlogHer experience, we ran a 5K through the streets of NYC at 6:30 in the morning. (The photo of Amanda flipping me off in front of the Empire State building did not make this post. She is not a morning person and did not realize the race was at 6:30 when she agreed to it.) This was part of the Tutus for Tanner initiative and just a very cool idea and a very cool way to see the city. 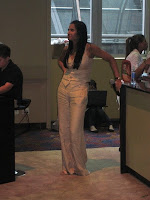 Also part of our experience was stalking Padma Lakshmi in the exhibit hall. And while we did so, the company she was promoting desperately tried to get us to sample food and Twitter about meat products. (In their defense, we did kind of loiter around the booth for several hours minutes each day so that we could get a photo with Padma.) At one point, one of the people working at the booth asked me to fill out a survey. Because I'd been lingering at their booth, I agreed to do it. One of the questions: "How do you feel about lunch meat?" Honestly. How do I feel about it? In the spirit of full disclosure, dear readers, I have never really delved into my feelings about lunch meat, and I suppose this was as good a time as any to stop repressing my feelings and put some serious thought into it. And now now that I have...it would be "titillated", I suppose. Though also sometimes sanguine, bitter, euphoric, taciturn, woeful, melancholy, hopeful and joyous. (I'll be continuing to explore this with my therapist for months to come...I have a lot of work ahead.)
We hear that there were a lot of great parties at this thing, though we opted out of most of them to explore NYC. A decision we were fine with until we rode the elevators with people whose bags were bursting with goodies from some of the exclusive parties they had been invited to and we were asked which parties we had gone to. We just began answering, "We hosted a rib party at the Brazil Nut Lounge." (A response that came to Amanda after she was fortified by a few cocktails.) And come to think of it...who wouldn't want to go to a rib party?
Only someone not in touch with their feelings about meat, probably.
Posted by Brutalism at 3:42 PM

When I think about lunchmeat the word "giddy" springs to mind.

No idea why, really.

Bashful about bologna
Skeptical of salami
Positive on pepperoni
Randy for ribs!

Also, I still think you're pregnant. Now I also think that you're completely irresponsible for drinking while you have a fetus in your womb.

I bet you love the word womb, don't you?

You know what word I love? Skylingi. It's my word verification. WTF?

My word verification is "whato." Who in the hell invited Rachael Ray to this blog?

Lascivious for lardo
Mortified of mortadella
Ovulating for olive loaf

By the way, you should consider mainlining alcohol and skipping the stomach altogether.

By the way, seems like your experience with 1 800 Hotels could have been worse:

Moooooog - I think we all know about the lunch meat incident of 2006...of course it makes you giddy.

My minions are clamoring for a picture of Padma. Please to oblige.

Tard, not to call bullshit, but is ovulating really a feeling?

Haha, I'd have flipped you off at the Empire State Building too if you had drug me out to exercise that early in the morning!

I'm sorry, but I stopped reading and had a minor heart attack when you said you can't have coffee... or alcohol. And then I had another palpitation when I realized coffee might actually be more important to me than the alcohol. I'm old.

Oh boy, do I relate to your reflux issues. Even went as far as to have an endoscopy. they found nothing but boy, there are times I swear I'm having a heart attack.

I'm now wrestling with the realization that I'm not nearly self-aware enough.

I've had actual Padma flashbacks this week, at random times. Her Death Stare will just pop into my consciousness and freeze me in place. It's led to some socially awkward situations. I've been taking the edge off with the occasional chalk ciggie. Up to a box a day when it's bad.

One cold December morning at a Motel 6 in Poughkeepsie, lunch meat left me with nothing but an empty Miracle Whip jar and a smile.

I wonder what Julie thinks about lunch meat.

"Julie, how would you feel about a nooner?"

What is this Blogher? Why wasn't I invited? Jeez.

I didn't think I could still be shocked after reading the poop swap post (catching up with my Brutalism reverse chron for a change - I don't know why), but the 1 drink no coffee reveal is impossible to process. So glad you still managed to recount colorful details from your adventure for us. Maybe the endorphins from the 6:30 scamper helped. Impressive to a recliner jockey (at the moment) such as myself.

P.S. After reviewing Dori's post, I'm inspired to fashion a Padma portrait from lunchmeat. Olive loaf for sure.