We were fortunate to travel to Paris and Casablanca for spring break in 2018 - and it was both the first time in France and in Morocco for any of the Brutalism family. In anticipation, I brushed up on the conversational French I knew, which was extremely helpful in both countries.

As with all travel, it taught us a lot - so here is Paris and Casablanca 2018, what I learned:

1.Your junior high French teacher, Mademoiselle Bennett, will be in your head (tete) the entire time you are in both countries, reminding you how to hold basic conversations with the people you meet. You will be able to ask how much something costs, where the exit is, if you'd like to go to the beach with Alice and Pierre, and sing the French national anthem, all of which you will use during daily interactions with people. (Aside: the French now hate us more.)

2. You will determine the Paris metro is far superior to the DC metro in terms of frequency of trains, areas accessible by train, and cost. You will also determine it is less urine-y than the NYC subway. (Another aside: our 12-year-old kid easily navigated the metro during our stay - including unlocking the metro doors properly, a detail I conveniently forgot each time we rode.)

3.You will remember why it is so important to eavesdrop during your travels. While waiting to enter (the pre-flambéd) Notre Dame Cathedral, we saw a family next to us standing on a bronze star and saying, "okay, we found it, what's next?" So we followed suit and stood on the bronze star and took a photo with the intent of learning about this after we were back in our hotel room. Turns out it was Point Zero, the central point from which all distances are measured throughout the country.
4. You will learn Le Marais is an excellent neighborhood in which to stay. We were half a block from the metro, a grocery store, a boulangerie, a patisserie, and close to galleries and museums. You will find it vibrant and convenient and a great place to stroll. (Bonus: It is very fun to say "Le Marais" with an exaggerated French accent.)

5. When you consider visiting a flea market, you should make sure you get past the outer-circle-of-crap-and-knockoffs into the core of fabulousness. (We made it to a creperie and bought some boots, so even though it was officially part of the O-C-O-C-A-K, it was kind of win, just not the rom-com Paris flea market aesthetic we had envisioned.)

6. You will realize when you pack some of the same clothing items as your daughter, you should model them in your hotel room and take a photo. You should then don berets and stand on a street corner pretending you are trying to get out of a box or walking in very strong wind. (Seriously - could we look any more like mimes?)
7. While I'm glad we went to the Louvre and fought our way through crowds to get a glimpse of the Mona Lisa, there are so many more interesting and manageable museums to explore, including our favorites: The Centre Pompidou, Musee D'Orsay, and the Picasso National Museum. (We did have one cool experience in the Louvre when a spontaneous dance performance happened in an atrium as we were walking through, so that made it especially worthwhile. Until the dancer did some sort of primal scream as part of the performance which scared the bejesus out of us.)

8. Even though you don't expect to get that excited about the Eiffel Tower, you will get totally excited and take approximately one million photos there at different times of day and night: 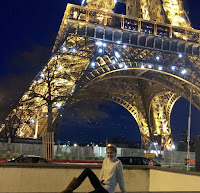 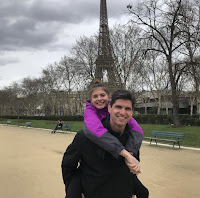 9. You will never quite get used to the heavily-armed guards at all of the major tourist attractions, patrolling the streets in Le Marais and in most of the metro stations - though you will appreciate the vigilance. Although, you will not appreciate the nightmare of being attacked by terrorists that causes you to let out a bloodcurdling scream that wakes your family in the middle of the night. (I'm very suggestible and seeing this many guards obviously lodged in my subconscious.)
10. You will envy people on a "bustronomic" tour of Paris (a glass-topped bus where you can sightsee while a gourmet meal is cooked and served to you en route). What a concept! With a stupid name! There were no reservations available, so we settled for hot chocolate, a Mont Blanc and macarons from Angelina's, which we ate in the Tuileries Gardens across the street. (People feel very strongly about the Mont Blanc - you can count me in the 'not a fan' category. Teeth-achingly, cloyingly sweet.) Pretty, though.
10. When you land at the Rabat airport in Morocco as the sun is setting and learn from the information desk at the airport that you should not trust the taxi drivers, you figure out how to exchange cash for dirham, purchase train tickets from a machine, and board a train to travel the hour to Casablanca. This is done with complete faith in those who are helping you as you board the completely empty train and leave the city center to head through pastoral areas in the dark. (Your child will sleep through all of this as you try and use the GPS on your low-charge phone to follow the route. You will also remind each other that what is travel if not an adventure that takes you out of your comfort zone. Repeatedly. And until you almost believe it.)
11. When the concierge at the Casablanca hotel tells you the 30-minute walk to the Hassan II Mosque is pleasant and takes you by the famous "Rick's Cafe" - you realize you must have made a wrong turn because it is not pleasant and you do not see the cafe. However, the tallest minaret in the world serves as a beacon and you easily make your way to the mosque and take a tour. Feeling emboldened by your navigational skills, you will decide to walk back to the hotel instead of taking a cab and end up in an area that feels very unsafe. Wanting to get back to the hotel as quickly as possible and with an adorable trait of getting angry when nervous, you will probably bark "GET YOUR HEAD IN THE GAME!" at your daughter when she stops to talk to and try to pat a stray cat. [Note: You will then be (justifiably and incessantly) mocked about this for the rest of your life.]
12. You learn security at the Rabat airport is no joke. According to the State Department, Rabat is much safer than Paris (hence, all of the guards with AK-47s in Paris); and that is quite possibly due to the 95 layers of security we passed through while going to our gate. A screening for us and our luggage as we walked into the airport; the normal security line once checked in for our flight; then a third screening at our gate to Washington, DC, that required every passenger to take off their shoes, get their hands swabbed, and answer a series of questions before going through a third metal detector. I had planned to walk the airport and shop for snacks prior to the flight, but was not about to go through that again, so we stayed put until our flight left. You will never feel safer getting on a flight in your entire life.
13. You are reminded of the kindness of people once on the flight when you and your daughter are seated in the first row of the middle seats with plenty of leg room and your husband is crammed in a middle seat a few rows back. When he comes up to speak with you, a lovely woman sitting next to you will realize you are traveling together and offer to switch seats with him. When you thank her but let her know she would be giving up a comfy seat for an eight-hour flight in exchange for a cramped middle seat, she will say, "I know if I was traveling with my family, I'd appreciate if someone did this for me." And you will all get verklempt and vow to pay it forward.
Here's looking at you, kid,
Brutalism 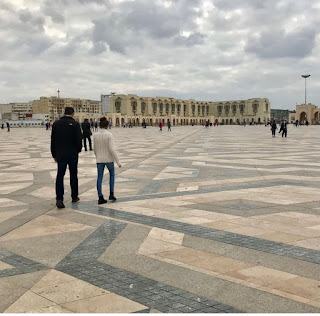