A highlight of our recent vacation to the Bahamas was the "shallow water interaction" with the dolphins my daughter and I did on our second day there. (Another was when Canetto tried to access Brutalism from our hotel's business office and got denied with a message saying the web site included explicit material.) 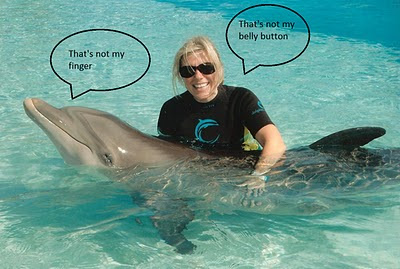 Well... congrats on the scoliosis?

Very much like the newest Modern Family episode... "If you ain't white, you ain't right"...

StephanieC - Wasn't that hilarious? And Phil couldn't figure out why the taxi driver had attitude. Love that show.

The scoliosis is much better. Thanks!

So, did you say "Wha CHA?" and the dolphin laugh it's soggy ass off at you anyway? How wast he rest of teh

Scoliosis: it's much like being turned into a newt:

JTA - Yes. Recovery time for scoliois and being turned into a newt is fortunately, not that extensive.

I just attempted what I thought could be a good Wha CHA, not really knowing exactly how it's supposed to sound. My son whipped his head around and said, "What? Is it Fred? Are you imitating Fred?"

Now, if you know of whom my son is referring, then I'm very sorry that you have been exposed to this extremely obnoxious and annoying character.

But I'm still wondering if my "Wha Cha" scores with the dolphins. At least I'm prepared for when we get to Atlantis. (either that or I'll end up scaring everyone out of the pool)

Am laughing out loud right now! (Is it still cool to write LOL?...I never know...) Anyway, this was funny!
I'm not surprised that hanging out with a daulphin would be more fun than Harry Connick Jr....just thought I'd add that in here..
Great title to your post, I did not groan, was rather impressed by the play on words.

Lisa - No. I don't know who this Fred character is. I'm intrigued.

When are you going? Your Wha-CHA HAS to be better than the ones in our group...you shouldn't worry...

Sandra - No offense to Harry...he seems like a good guy. It's just hard to figure out what to say to someone famous that does not come out like gushing fan-girl.

Interestingly, I had no problem gushing like a fan-girl to the dolphin. I'm pretty sure I used a baby voice, even. I have issues.

Oh how the mighty have fallen. The Dauphin relegated to giving the Hunchback of Notre Dame high fives in a pool in exchange for fish.

Dilettard - Kind of a literary take on "Behind the Music" --

would u like a link exchnge with me blog

if yes email me @ sahlcoolio@gmail.com

It's Lisa ~ yep...that Lisa! The really funny one from college!!!!
Email me! You are still hilarious and I am too! ha!

I miss you. How the heck are you and all of your boys (the lil ones and the big one)?

Write to me! I have the same yahoo address I've had forever...

One of your best in awhile. Very much enjoyed it. Not so fond of the blatant racism however. I take great offense to it as I am fluent in ebonics and have a large penis.

My word verification is 'wingle.' That's really all I have to say.

OK, OK, I also want to say that if I'd been in your Wha CHA group, I would have LMAO at your comment. Pretty sure the kids are still using that one. By kids I mean 30 yr olds.